Still Waters was a performance about performance, an act of social practice steeped in professional and creative risk, using water and the very architecture of the Singapore Art Museum (SAM) to critique itself.

Like a radio signal rebounding across time to make another broadcast 21 years later, the performance Still Waters was honoured as the theme of the M1 Singapore Fringe Festival in 2019 under the leadership of Artistic Director Sean Tobin. Featuring interpretative productions of Still Waters by prominent and emerging theatre practitioners across international borders and locally, they were staged for a present-day Singaporean audience who may not necessarily have been cognizant of the inhospitable conditions under which artists worked at the time of Still Waters’ original making and presentation in 1998.

Still Waters was a performance about performance, an act of social practice steeped in professional and creative risk, using water and the very architecture of the Singapore Art Museum (SAM) to critique itself. Newly-minted in 1997, SAM commenced operations against as an aspiring regional authority on contemporary art in tension with the counter-creative state of the arts in Singapore at the time, and as a consequence, it has had to carefully choreograph the incompatible pressures of observing the government’s exclusionary stance taken on performance art through a harsh decade-long proscription in 1994 while accessioning artworks from the region into its holdings (widely claimed to be “the largest international collection of 20th century Southeast Asian art”) that were themselves encoded with the freedom of dissenting voices.

Against this troubling backdrop, Still Waters sought to register the state’s unreasonable attempts to contain and constrain artistic and cultural production by staging a scriptless performance in the drain of the Singapore Art Museum whilst the ban was still in effect, and hence, its illegality.

Of the many cavernous and intimate spaces available in the retrofitted colonial architecture of the Singapore Art Museum, my body was drawn to the decades-old drain that stood out in humble contrast to the hallowed and sanctified halls on offer to the ARX5 project. For the eye looking for an incidental, non-designated exhibition space, this drain overflowed with aesthetic, conceptual and political richness.

Beneath the teeming economic activity at street level in Singapore lies a complex undergrowth of drains laboriously etched into the city surface island-wide. As receptacles, they keep decay and filth at bay as well as the excess volumes of rain and flood water that cannot be allowed to overflow into the pristine city environment. These shallow, revealing longkangs (drains) feed into deeper ones that, in turn, rush into the gaping canals that readily divert all forms of the abject away. With no obvious starting point, they proliferate, bifurcate, interlink and operate from multiple centres, stating its presence everywhere. As a child, I witnessed waste and death drift past in the canals - half-decaying remains, from toys to carcasses, flotsam to furniture and uprooted trees, embraced helplessly and lifelessly by the speed of torrential rains.

Drains operate as a visible sign of the abject, discouraging any form of proximity by the stench they produce. As metaphorical repositories for society’s overflowing unconscious, these longkangs collect,  siphon and redirect the polluting, the expired or the “useless” into the watery depths of the sea around the island. But the abject, like the unconscious, has a persistent way of imposing itself upon us. The very ubiquity of drains is a reminder of the impossibility of disappearance, the futility of evasion. There is no escape, only return.

Neither truly part of the Museum nor discrete from it, the second-floor drain is a relic of the tropically-adapted colonial architecture, now bereft of purpose, having been excluded by a continuous barricade of glass walls around the Museum so as to control its internal “climate” from the vagaries of the external one, but it is also a backreference to the ambitious cultural enterprise of recoding colonial buildings into powerhouses for art (and other purposes) in Singapore. As part of a post-independence legacy, these architectural symbols of empire, destined for demolition, or if gutted, would have to be reconfigured as signifiers to brandish a new nation’s longing for the legitimacy of history. In this attempt to re-register new roles for a select few that have been saved from becoming rubble, the government has had to conflictingly recuperate its past as an instrument for rebranding colonialism whilst repackaging past Western hegemony as a period of nostalgia. Relatedly, the recasting of St Joseph’s Institution (a school for housing the teaching of western religious ideals as part of educating young boys) into its current incarnation as the Singapore Art Museum to hold captive the art and artistic ideals of the present signals that even the colonial past could be salvaged  by the colonial elite to meet its newly acquired taste for a “sense of history.”

Kept out of the control of the Museum by glass walls, the drain marks the architectural footprint of the building, enacting its continuous physical boundaries to unambiguously separate the inner sanctum of precious art and patrons from the outer sphere of noise and the threat of humidity from the tropical rains. Through negotiations with the ARX5 curator, Joanna Lee, I inverted the drain from a channel for redirecting water away into a receptacle for accumulating and holding water by blocking its drainage holes and installing customised glass dams. Hence, Still Waters 1998 came to be situated literally at the margins of the Singapore Art Museum, an abject space that underscore the the physical and symbolic limits of the museum.

As the Museum strives to keep moisture and water at bay, so too the State seeks to keep performance art out of public discourse by holding the bodies of artists in exile. As the institution maintains its conservation standards with sophisticated monitoring equipment to control humidity levels,  Still Waters re-introduces moisture as risk in the form of a body of water-in-waiting. By an act of inversion,  the drain turned into its very antithesis - a vessel of water within which a banned art form occurs, and in so doing, reconfigured an architectural remnant into a dissenting counter-site hosted by the Museum itself.

Liminal, yet a powerful transitional zone, the drain is also a conduit for the most transformative of materials - water. Attempts to control the flow of water, symbolic in its transitory physical states or precipitation cycles - from mist, steam, moisture and humidity into clouds, rain, sunshowers and hail, they pour into streams, rivers and estuaries that cannot help but flow into the oceans, only to return to the sky. This is but one in a vast interlocking system of energies that mirrors the way the State seeks to control the flow of concept, critique and intentionality of performance art. To freeze performance art out of the public eye and cultural production is like trying to produce seasons of snow and ice in Singapore.

Still Waters infiltrated the very portal of art, the Singapore Art Museum, to question the State’s efforts to outlaw performance by using the very prohibited art form to do so. Still Waters seeks to reinforce the validity of artistic and cultural production as a means of responding to public crisis and turbulent times with a view of the provisional nature of boundaries (individual, communal or national), and in traversing them, to bring into public view the issues of disembodiment, integrity, censorship and hidden histories - the lived realities of the artistically exiled and fugitive.

In the performance, I stepped into the narrow drain to distribute paper sampans (boats) folded out of photographs and submerged myself sideways lengthwise in the water. Isolated, yet completely transparent to the viewers on the other side of the glass walls, every nuanced or overt action was visible to the audience as theirs was to me. Each person reflected in the glass walls allowed for another inversion to show up. As viewers turned away from the galleries of sanctioned art behind them to reorient their gaze towards the drain, the performing artist and the streets below, the Museum as the foremost realm of art, power, visibility and prestige became the background for a banned art form.

Immersed sideways and lengthwise in the water, my body’s adapted to the orientation possible in the constricted twelve-inch space, so as to traverse the designated section of the drain, confined all the way by its narrowness. Sensorially, my body was divided into two experiential halves: one ear below water replicated the distorted silence in the Museum while the other ear above water received the input of loud traffic noise and sounds from the streets, unheard by the audience behind the glass walls. Along this path, I placed each sampan against my ear to ‘listen’ to what it might possibly reveal to me. In a somatic contradiction of physiological states, half of the body under water felt very cold while the other half above water was warm from the tropical heat. My body mass and the movements, however constricted, displaced a lot of water that overflowed into the Museum’s corridor in accentuation of the artist’s infiltration into the Museum. Like the water seeping through the cracks in the floor and its illegality, the work invites the socio-political and the personal-political to seep in and fill the critical gaps wherever “innocence” is proclaimed.

Still Waters 1998 was therefore a collection of moisture held for so long in obeisance to the marked and sealed glass borders of the Singapore Art Museum. Located in a brief passageway of sunlight where boys once ran to and from classrooms, this archaeological remnant of the Museum’s colonial past now hosts the consumer of legitimate art who strolls to and from each gallery. I chose this space for its sense of journey, the passing of time and the remaking of histories [vis-a-vis Performance Art]. The shallow pool of water provided a counter-site for the re-enactment of a loss of innocence, embodied by a performance that operated simultaneously inside and outside the Museum, at once in-between and nowhere, mirroring the performance of the “fugitive” body everywhere in Singapore.

In recognizing the historical significance of Still Waters over the two decades and its relevance to new and current generations through a theatre lens, the M1 Singapore Fringe Festival 2019’s  event statement observed that “[w]hile the cultural conditions [in Singapore] may seem different on the surface, more than twenty years after the de facto ban, the questions and tensions - important ones acknowledged in Still Waters 1998 - not only remain, but have become ever more pertinent” and concluded with a question posed to the audience, artists and the general public alike:

What happens to art when it is carefully regulated and only lives in designated spaces in prescribed and pre-determined ways?

* No script was provided or submitted at any time for the performance Still Waters as was mandated by the proscription of performance art that came into effect in 1994. 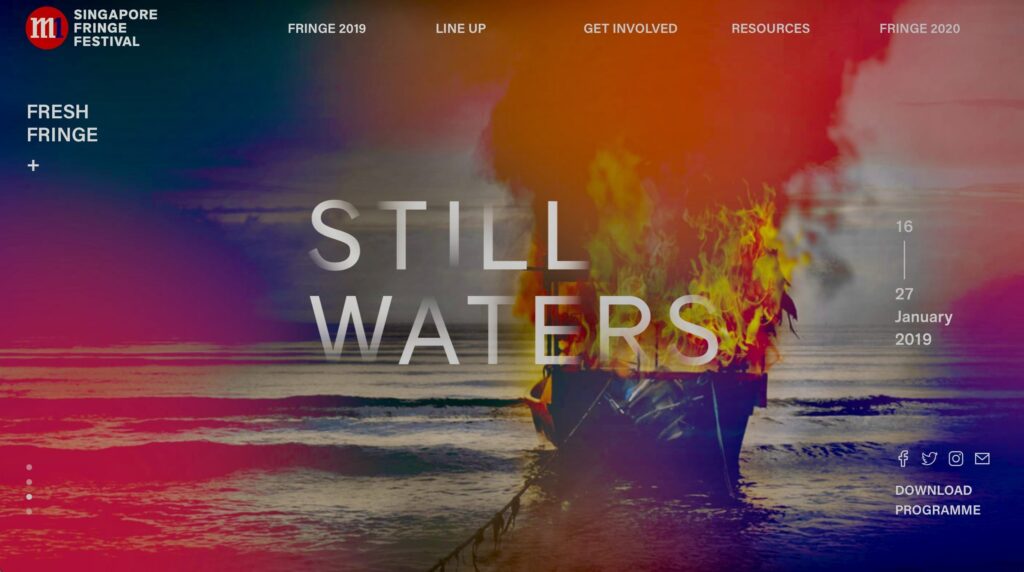 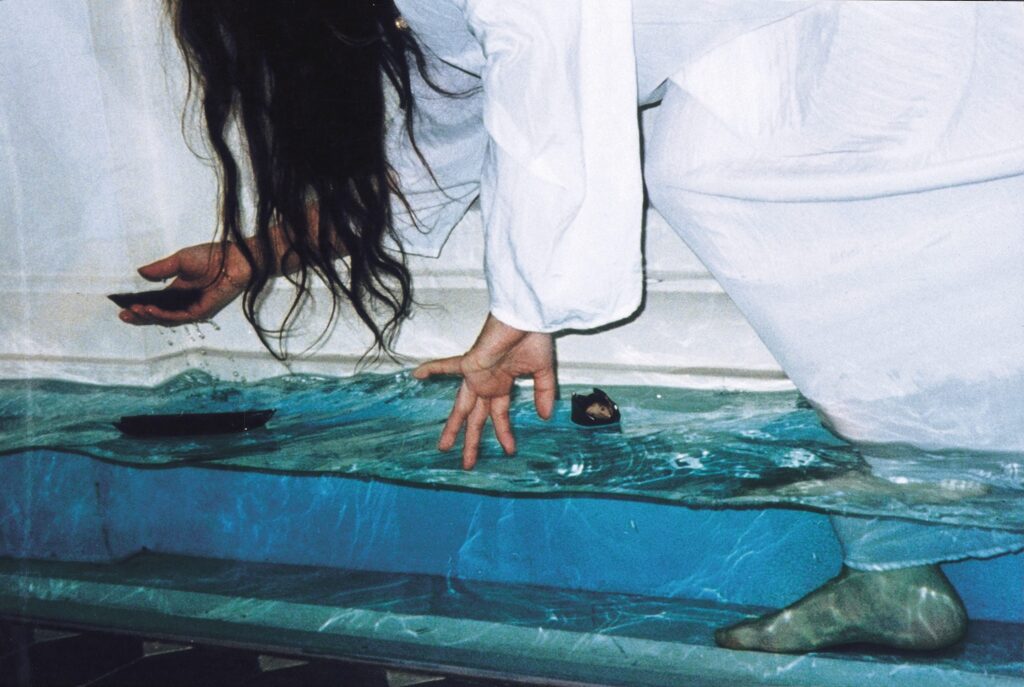 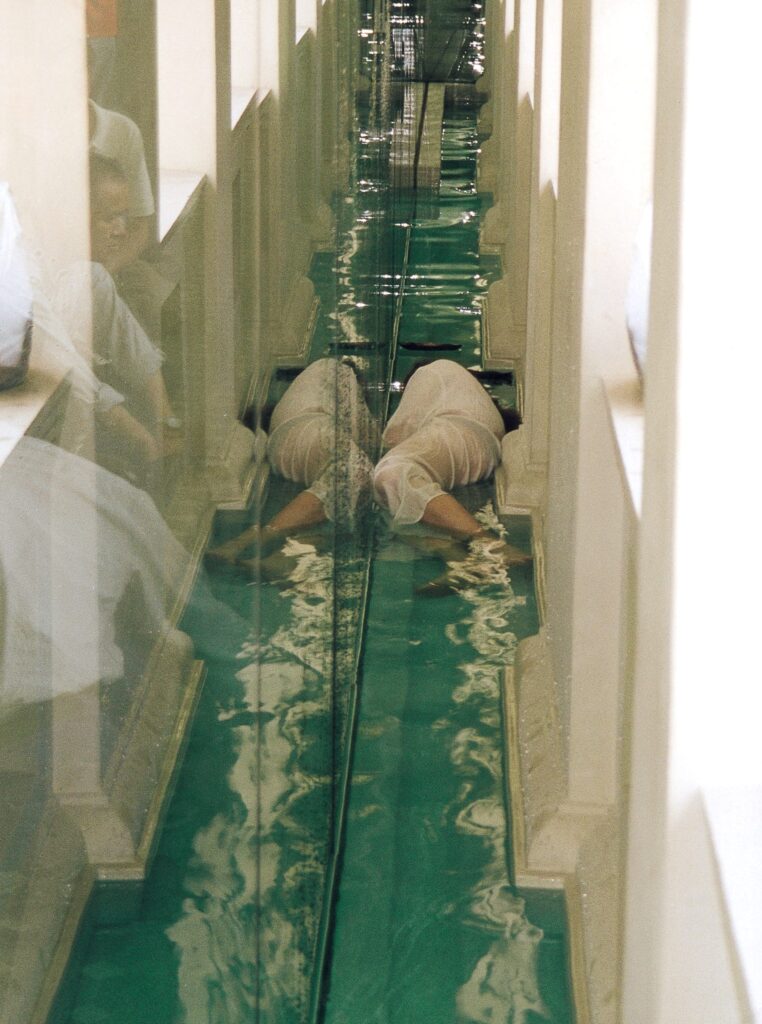 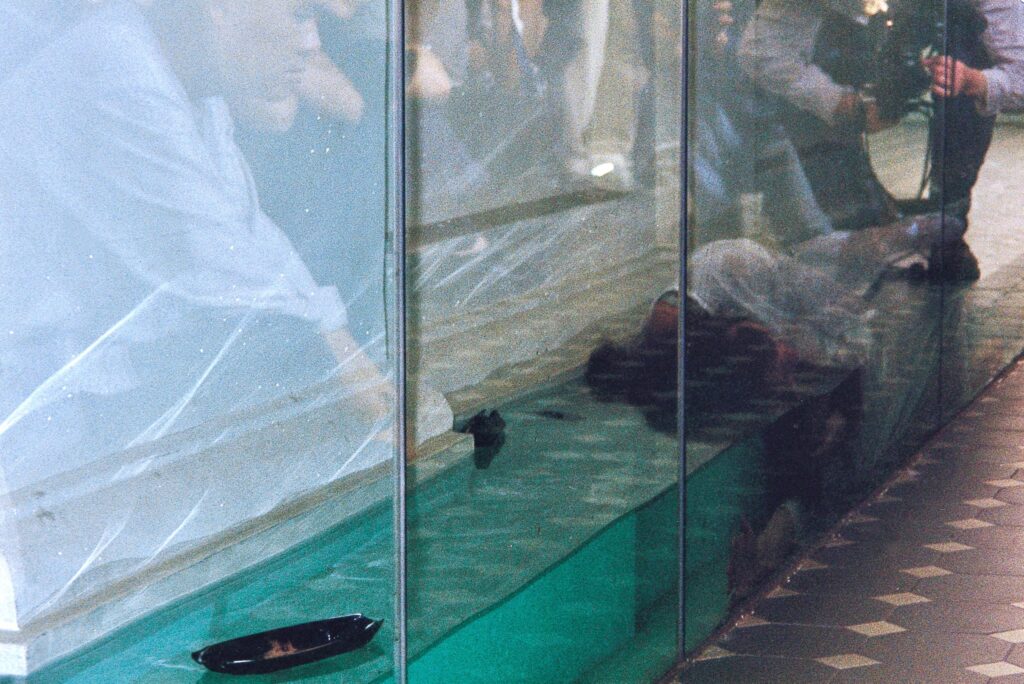 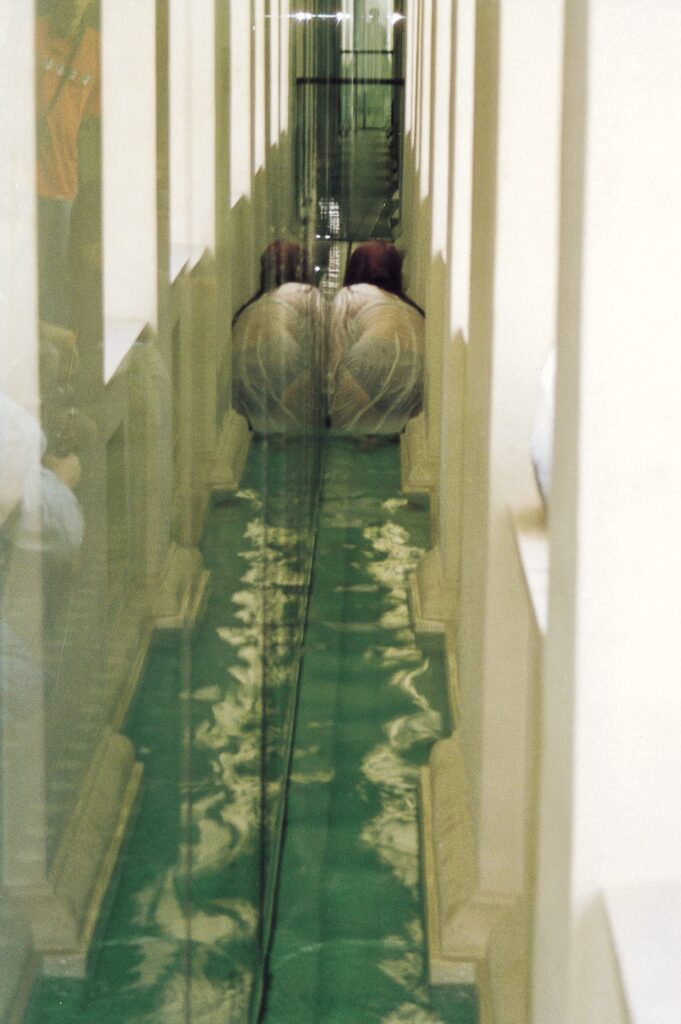 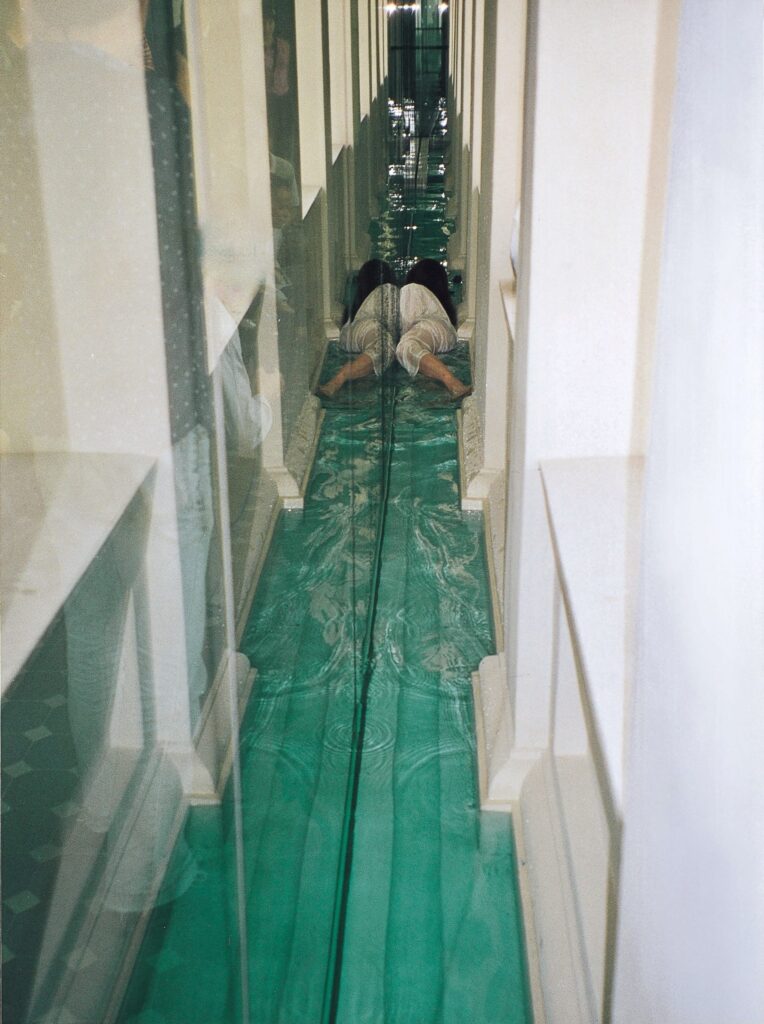 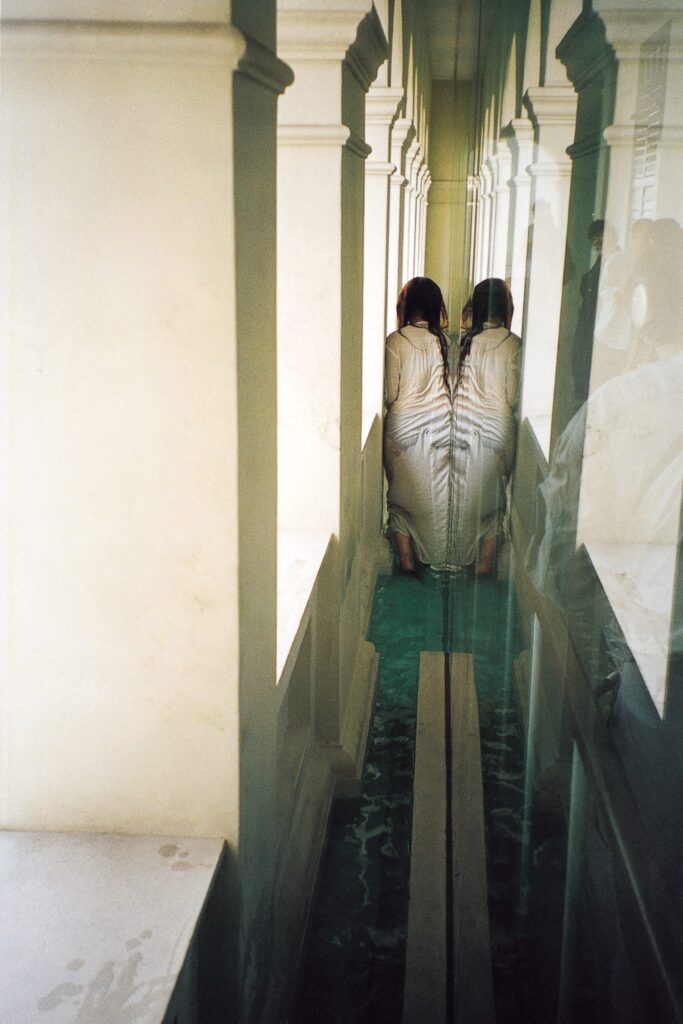 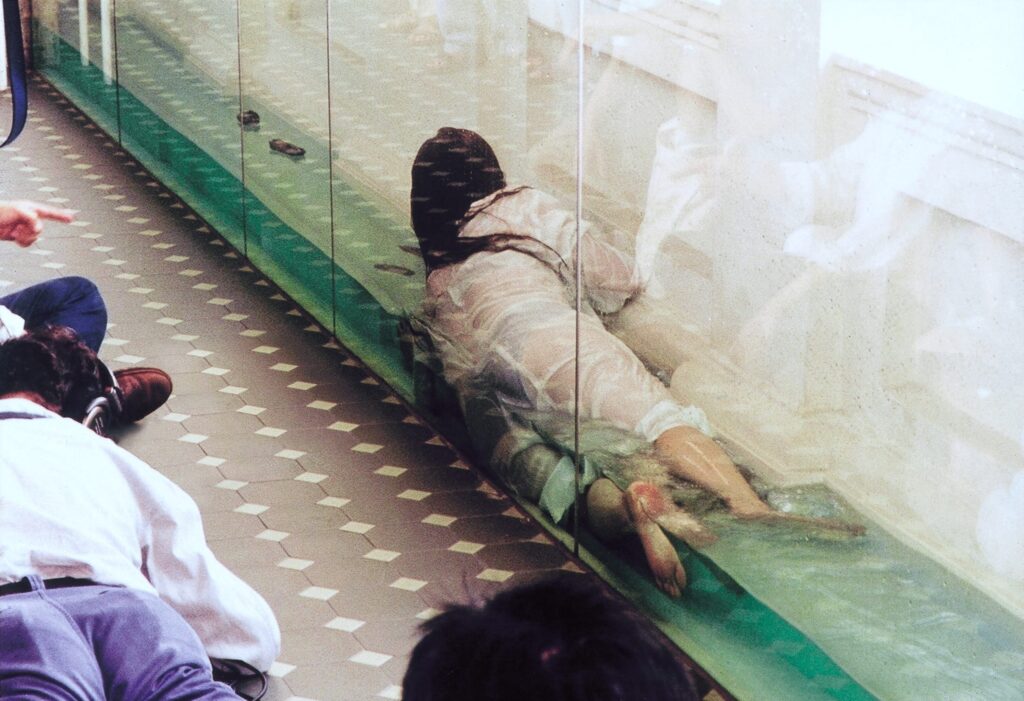 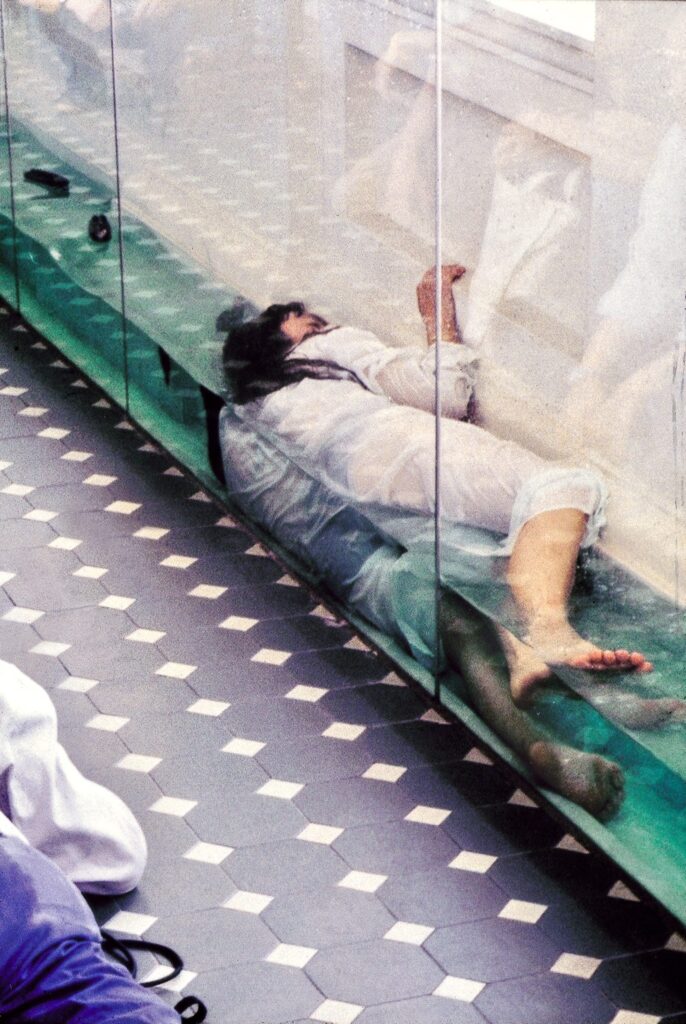 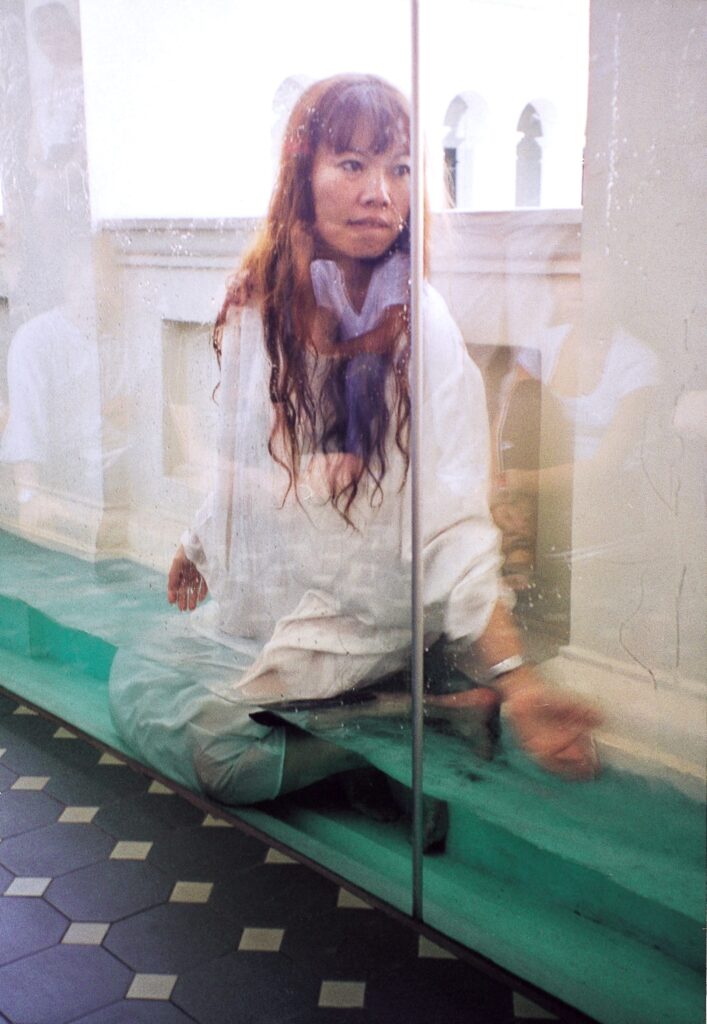 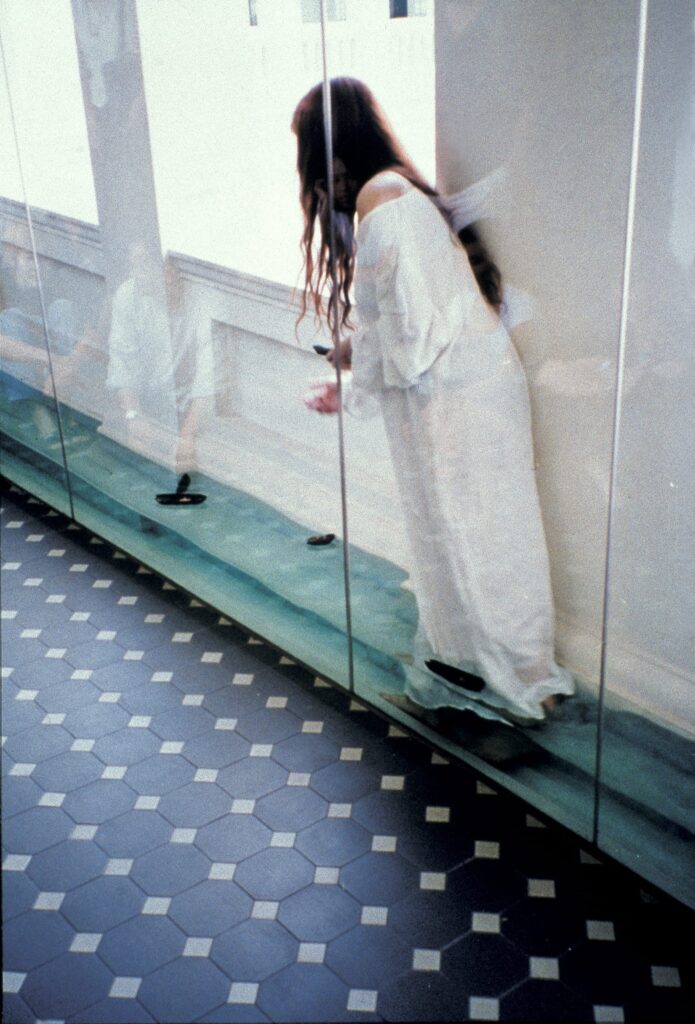 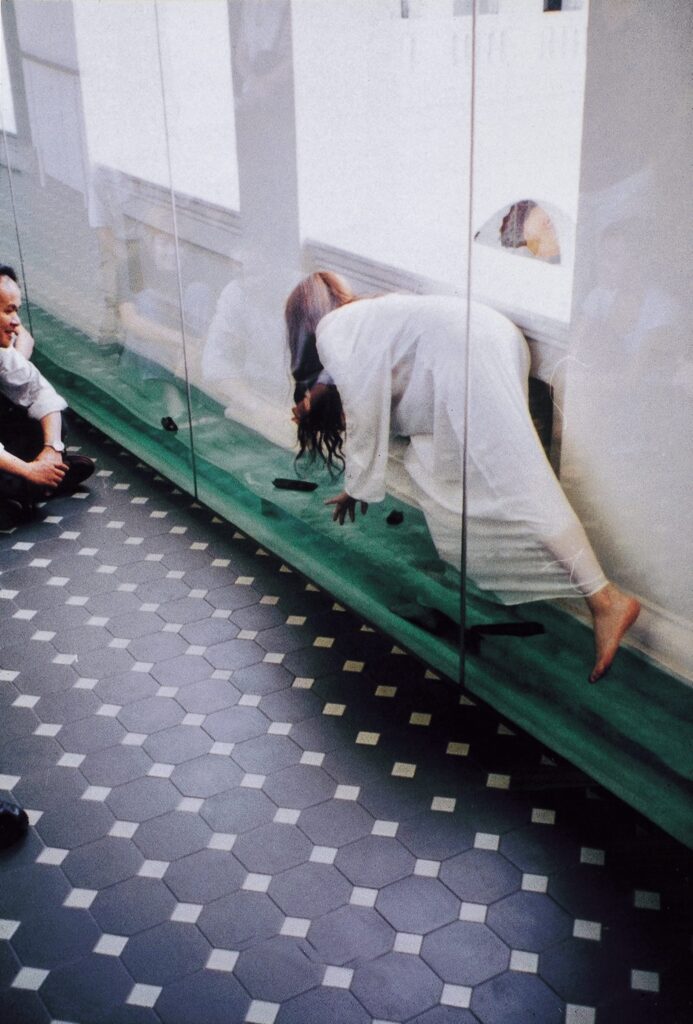 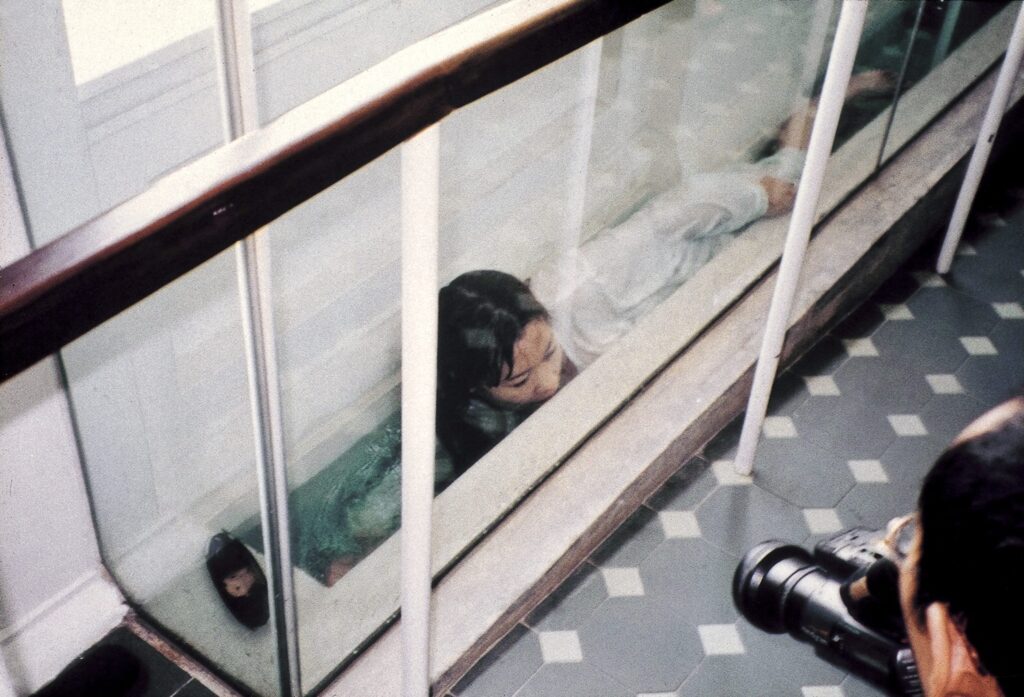 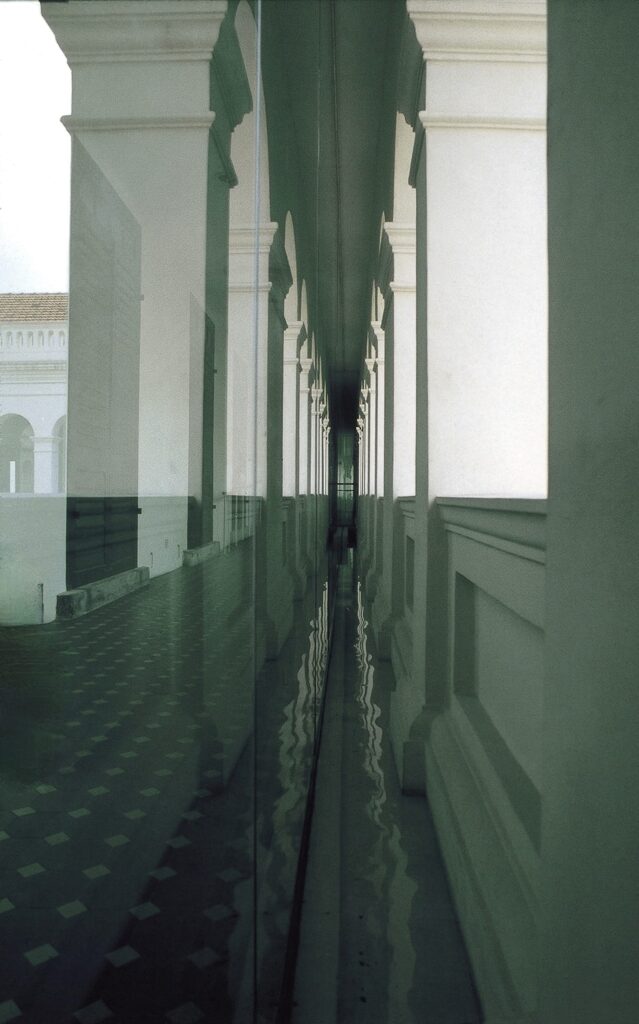 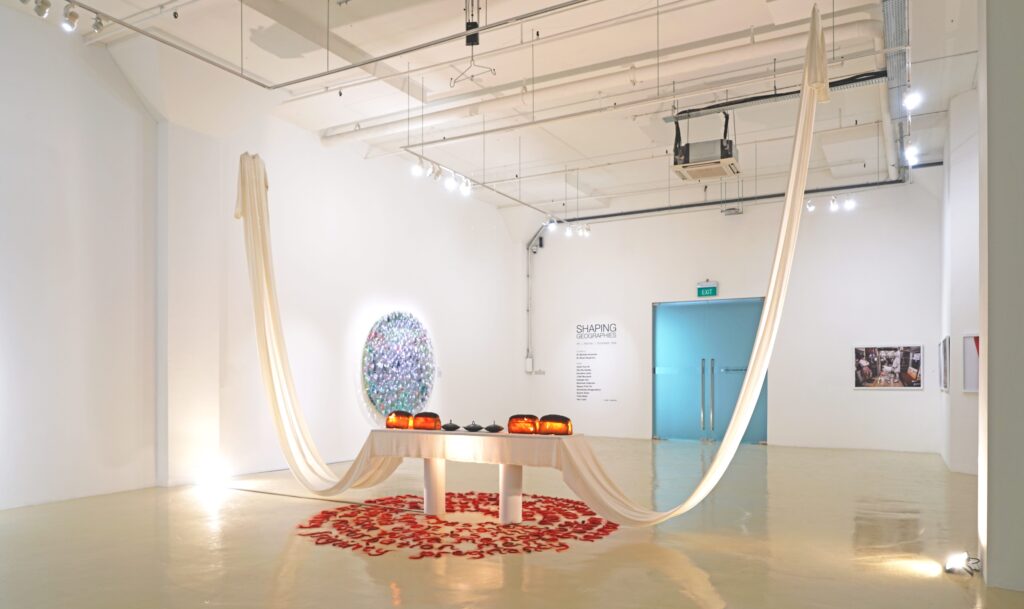 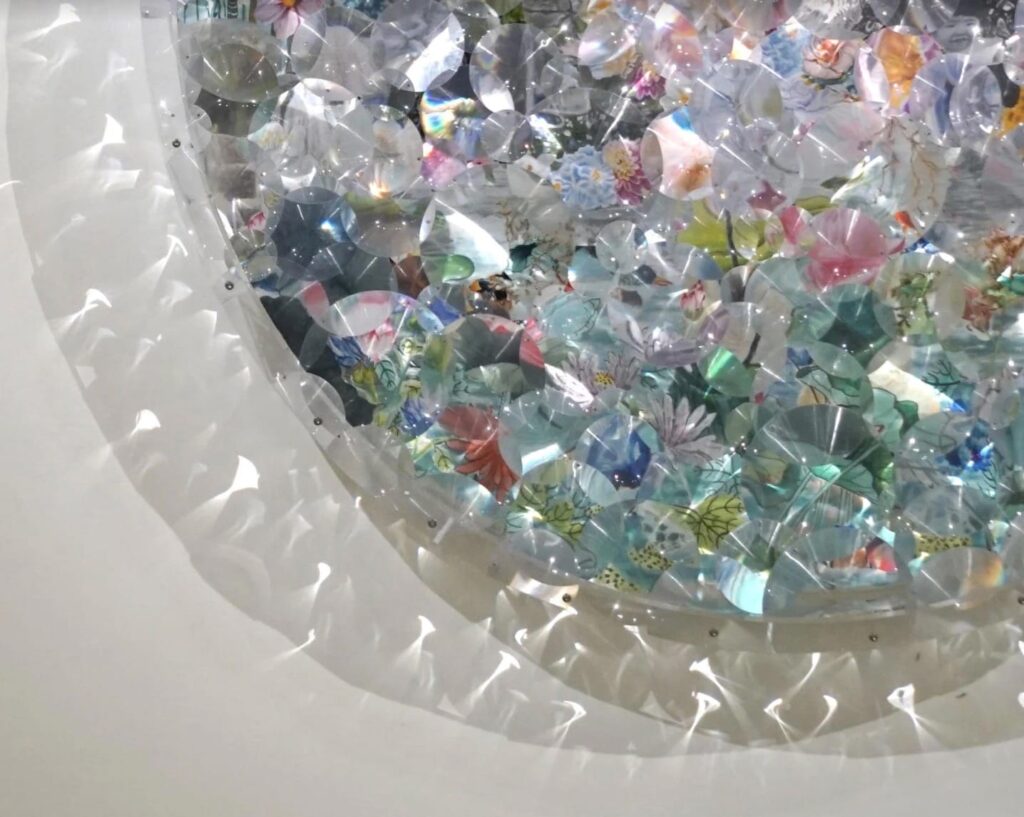 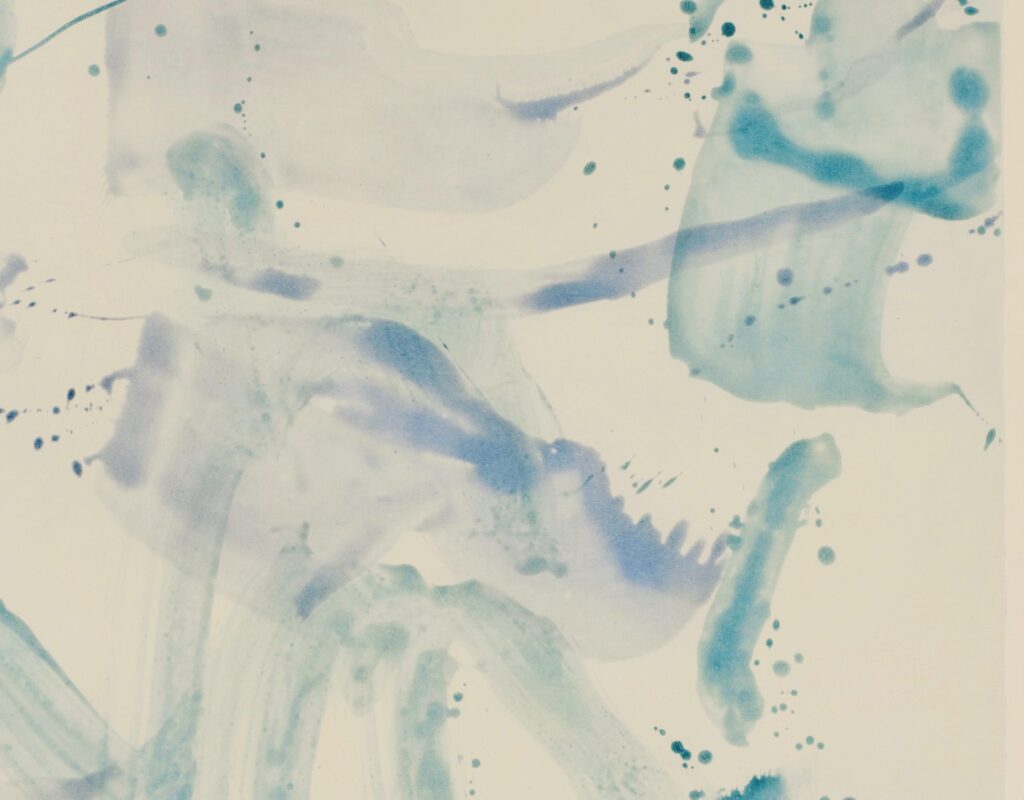