She’s Dearer Than You Think

A few months ago, I learnt of my close friend’s unexpected (and traumatic) discovery of her grandmother’s secret past as a coerced Comfort Woman enslaved by the Japanese Military in WWII.

I created this work to honour her.

A few months ago, I learnt of my close friend’s unexpected (and traumatic) discovery of her grandmother’s secret past as a coerced Comfort Woman enslaved by the Japanese Military in WWII.

I created this work to honour her.

She’s Closer Than You Think presents disjointed ways of seeing - to know more by seeing less. Obscuring the artwork - the anti-thesis of exhibition display - instead of full disclosure takes the directive in this divergent approach. Here, a screen of circular Fresnel lenses serves the two-fold function of obscuring while also bringing into focus parts of the image residing upon the canvas surface, contingent upon the viewer’s position and angle of observation. Never at once, can the entirety of the image beneath the lenses be seen clearly.

In this optically restless Lens Painting series, compound apertures beguile and confound the acts of seeing, knowing and beholding. Driven by this methodology of narrative discontinuity, hundreds of circular Fresnel lenses form an interface between the audience and the artwork, acting like a “shield” as well as a site for which and through which ‘face to face’ encounters between viewers and the lens-mediated painting are conducted. The painting itself was developed from a digitally embroidered tableau of selected photos depicting my friend Mei Yen’s grandmother, spanning different lifetimes than timelines from her teenage years, young adulthood and in old age before her passing. These cumulative layers of a beloved grandmother’s disparate selves that once provided loving memories, comfort and beauty are looked upon with renewed eyes of grief and pain for my friend, and in a singular commemorative moment of time and place, they are gathered for the first time into a virtual now, brushed into materiality upon a canvas surface proliferating with antiquated Nonya flora and fauna motifs

This portrayal in slivers of time rather than in whole is further accentuated by the way the lenses optically disassemble the image into further segments that are “enlivened” during movement - literally fading in and out of focus before one’s very eyes like alternating sensations of conscious and subconscious vision. Counter-intuitive and incapable of a full reveal, it can be said to account for kinetically-engaged viewers who have been observed with recurring side bodily extensions, lowered postures, standing on tip-toes, stooping, retreating - all because the same lens that magnifies a detail can also, with the slightest tilt of the head or a shift in vantage point, bring into view as yet unseen details that are adjacent or further away. Elements that were hitherto “unavailable,” held in secret by the lenses’ contradictory power to obscure and reveal as and when an appropriate angle is struck, serves only to (inadequately) approximate my friend’s vertigo of pain and trauma upon discovering her grandmother’s secret history, when as a teenage girl, she was sexually enslaved as a coerced Comfort Woman to the Japanese military in WWII.

Fissures, laser burned onto some of the lenses provide brief unobscured glimpses into the (painted) scene behind the (magnified) scenes, except in true scale. The burn patterns, drawn from a combination of images of veins and riverine systems, confront viewers as wounds that have been cauterised as if to be kept open to offer an unadulterated (in)sight. Clasped hands appear disproportionately larger than the face they belong to as a result of the random magnification. It is as though all previously held sense of scale, composition and perspective have gone awry - just like my friend’s self-concept. Her once (more) intact identity and selfhood - race, ethnicity, nationality, lineage, ancestry and heritage - are now weighed up with the violence, oppression and cruelty that pervades the psycho-social geography of Southeast Asian atrocities, injustices that demanding vehement questioning and re-questioning. Her undeniable transgenerational trauma, along with thousands of others, is also the trauma of selfhood arising from the shocking revelation that a part of her previously known Self (as Chinese) had lived the spectre of an Oppressor-Other (as Chinese-Japanese) all along.

These images of Mei Yen’s grandmother are magnificent testimonies of her deep courage and strength to show up in the face of undeservedly imposed shame, silence and taboo over decades. In the chasm between nationally-contested secrets and the politically gagged and socially exiled collective existence of the Karayuki-san, lies her legacy of thriving generations as exemplified by her granddaughter - my friend Mei Yen - who in granting me this knowledge, has in turn shown us that ‘Comfort Women’, the euphemistic term that belies the cruel lived realities of tens of thousands of sexually abused women, and whom revisionists seek to disprove from the comfort of banal distance, is in fact proximity. As I have learned, she could very well be the casual acquaintance, the neighbour down the road, the colleague in the office, the relative, friend, family – she is closer than you think. She is not someone else’s trauma. She is our trauma.

I wish to acknowledge and thank the Chua family of Malaysia and Australia for their unflinching courage and generosity in supporting and contributing to the making of this work. My deepest thanks to the curators of Dr Michelle Antoinette and Dr Wulan Dirgantoro for  supporting, writing and historicising women’s labour and contribution in Southeast Asia and beyond. I am grateful to Jasdeep Sandhu for believing in the significant contribution of this show and James Page and his team at YAL for looking after the production of this work at Gajah’s foundry in Jogjakarta with such sensitivity and professionalism.

Since its initial utilisation in Third World Extra Virgin Dreams (1997) presented at the 6th Havana Biennale (Havana, Cuba), the use of Fresnel lenses as an art-making material has been a mainstay of Suzann Victor’s practice. These transparent prismatic lenses, bearing the properties of reflection, refraction, magnification, and distortion have since been employed by the artist as a means of negotiating and interrogating both visual and cerebral aspects of perception in this and other works of the Lens Painting Series (She’s Dearer Than You Think 2020, Unequal Innocence 2020 & River of Returning Gazes 2022).

The development of lenses into a screen of compound apertures between the audience and the artwork, and the engagement of the “kinetically-motivated” viewer had its genesis in the series “I Was Like That Myself 2015,” the culmination of innovative methodologies arising from the artist’s invited residencies at STPI. 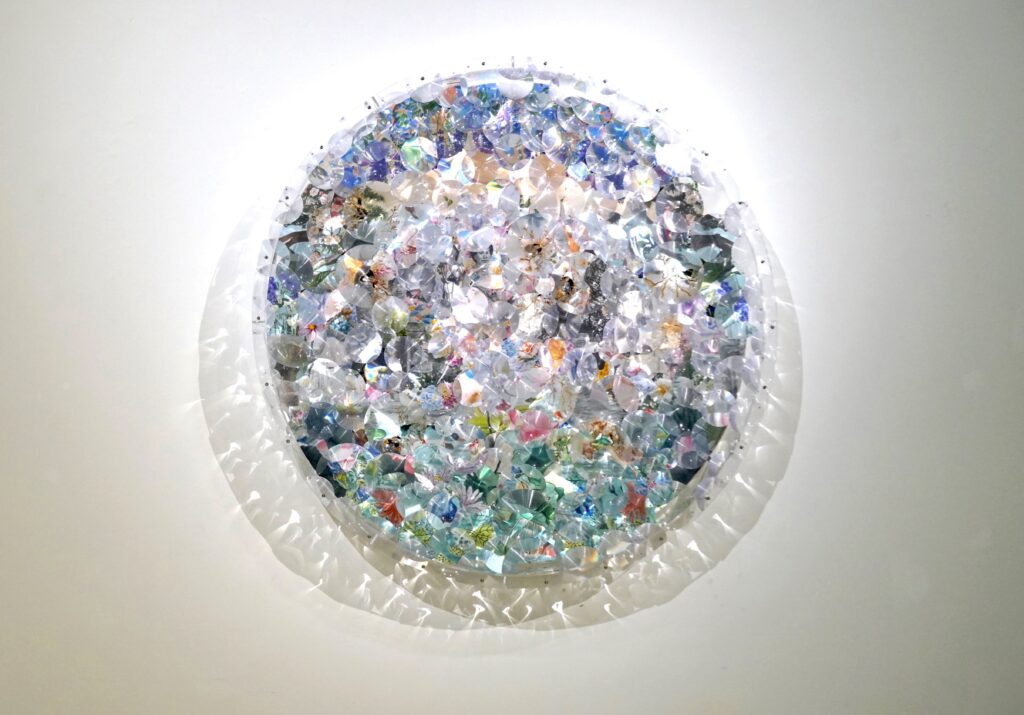 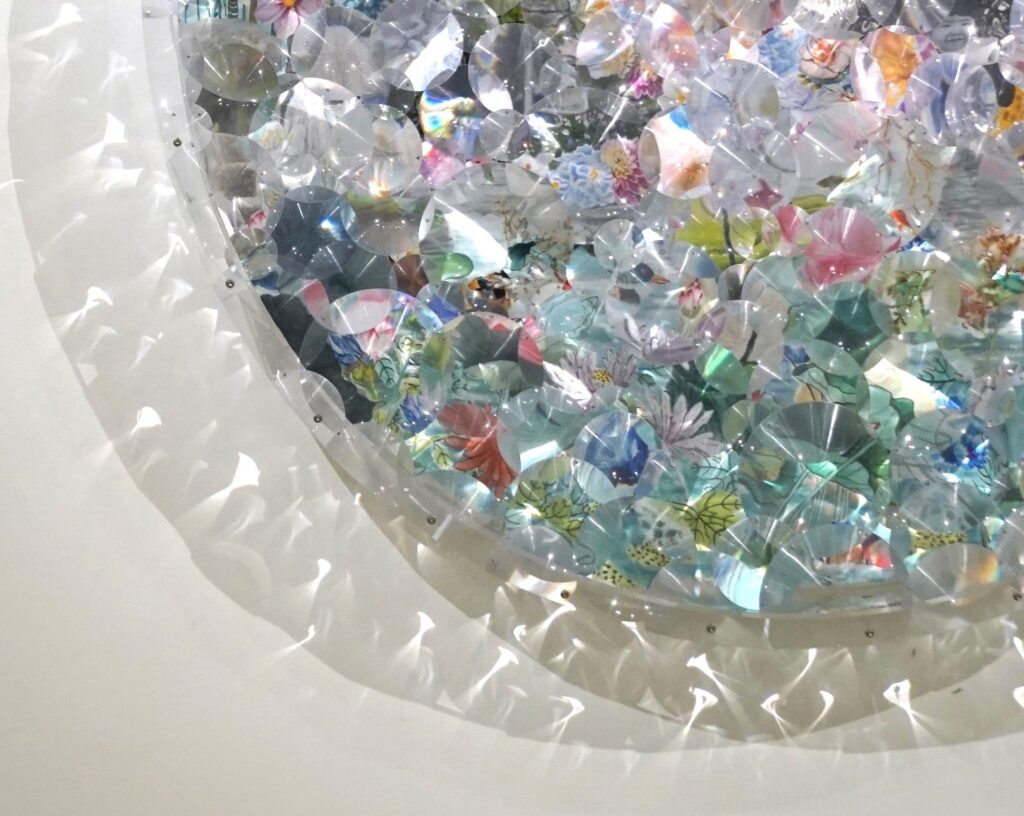 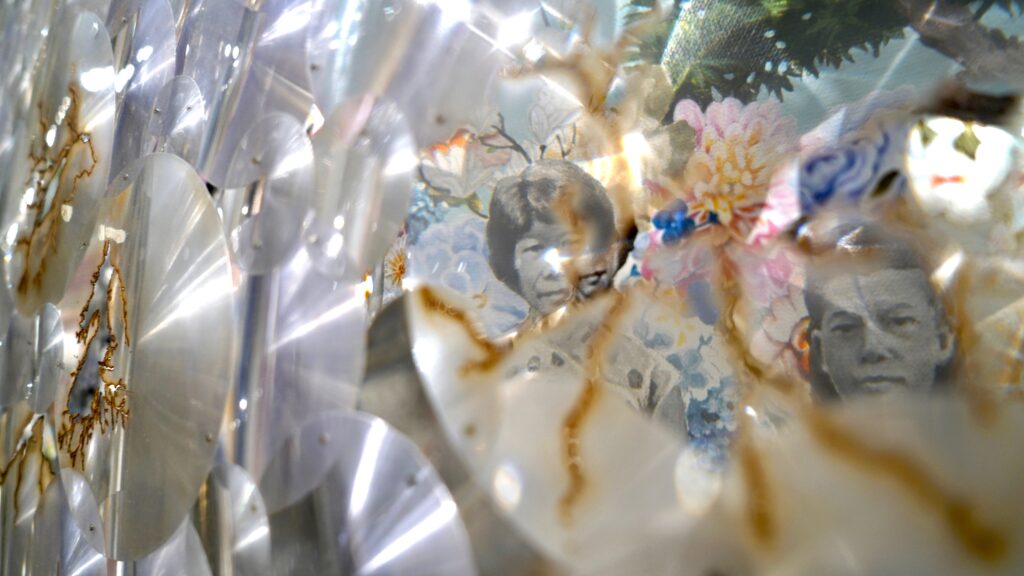 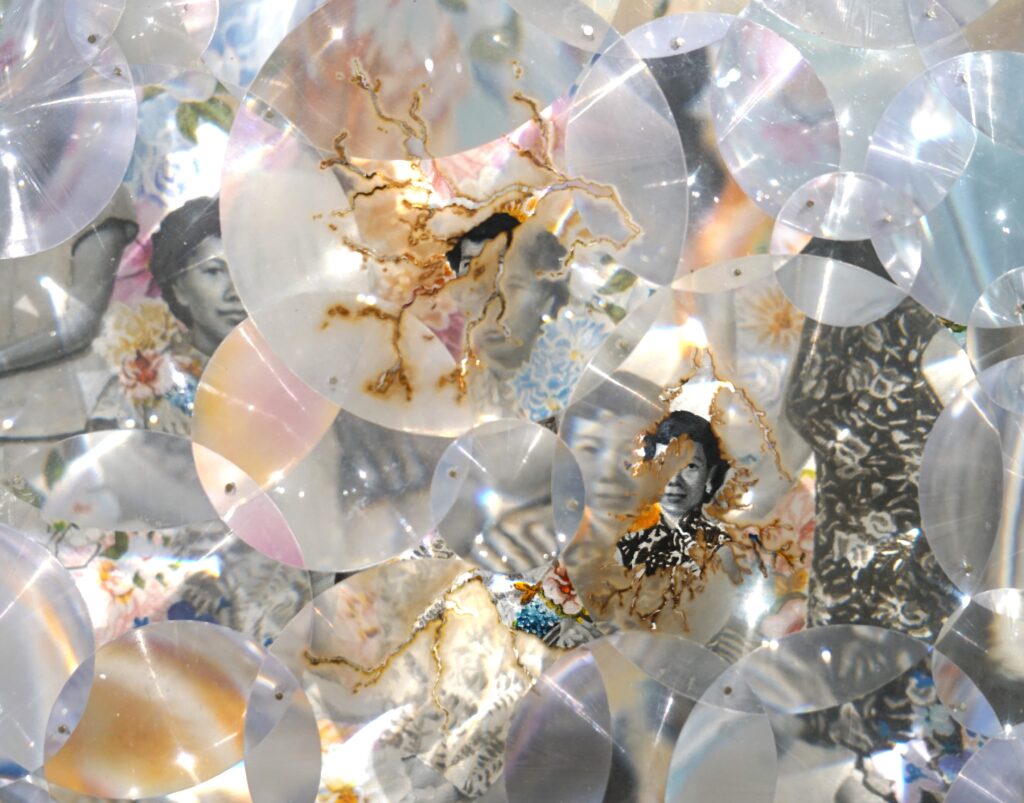 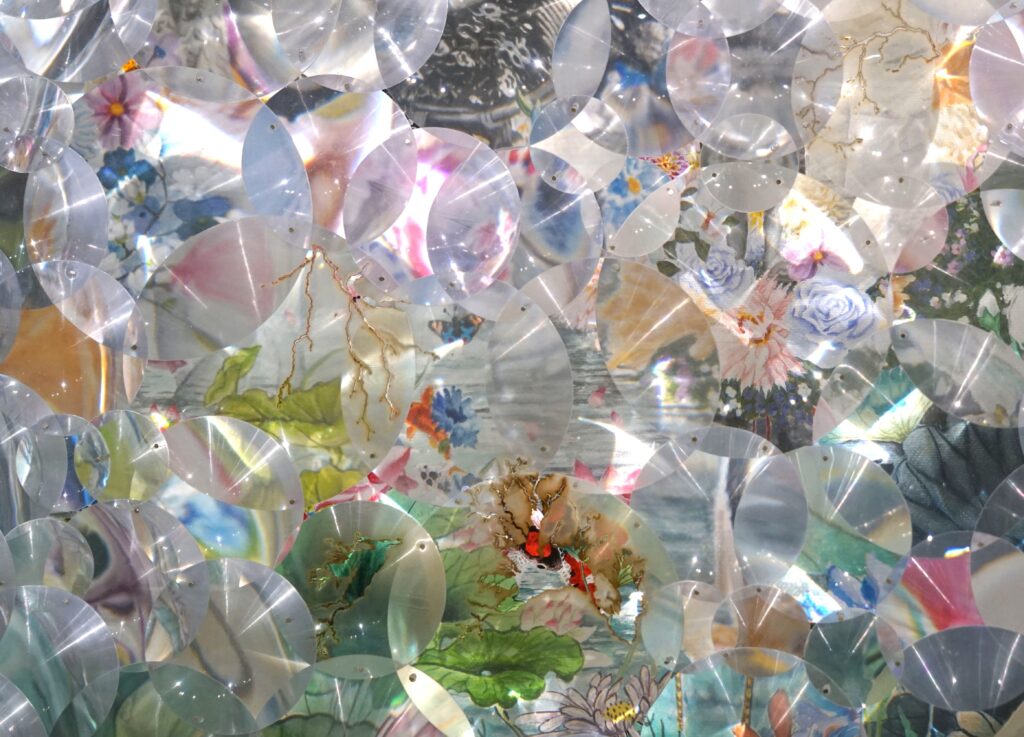 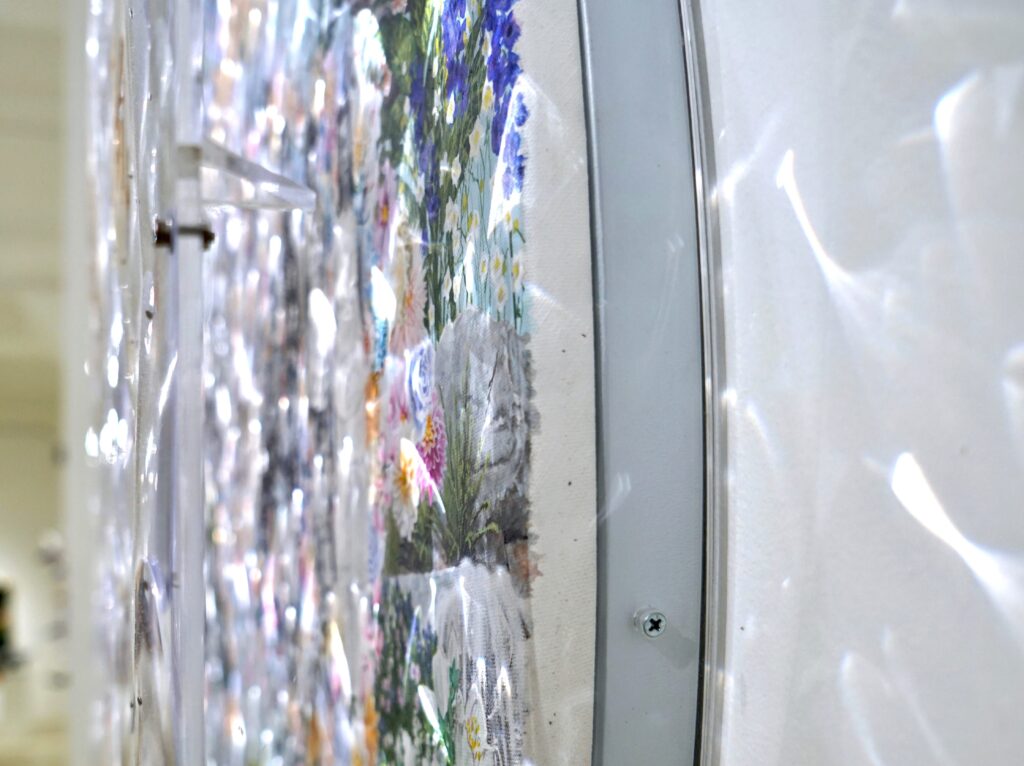 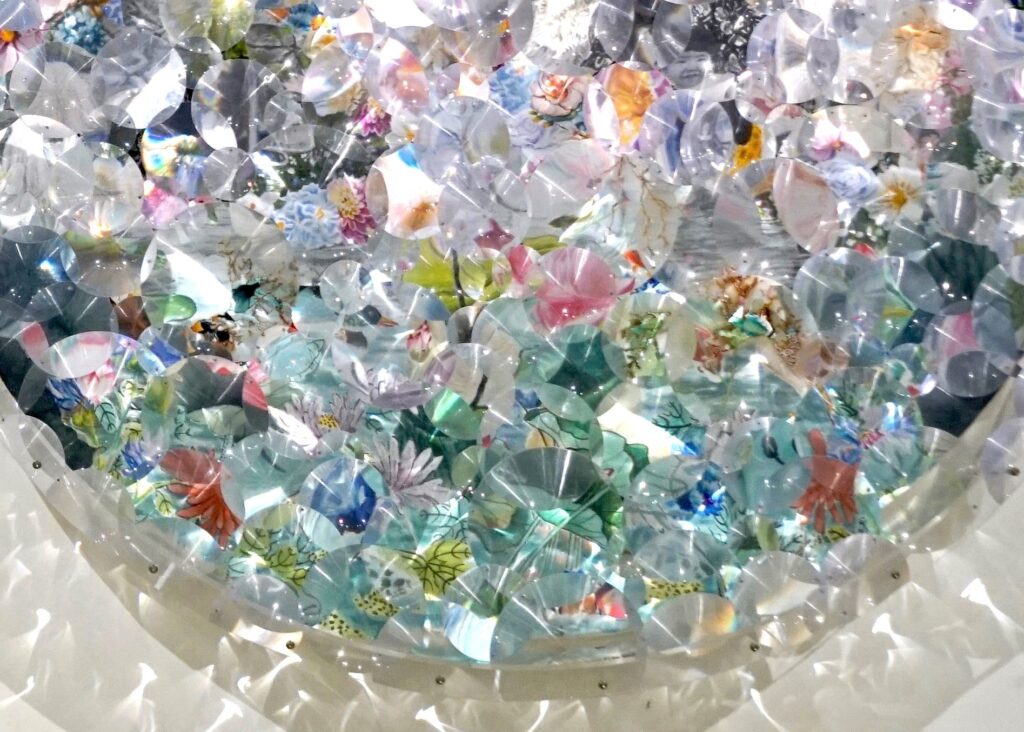 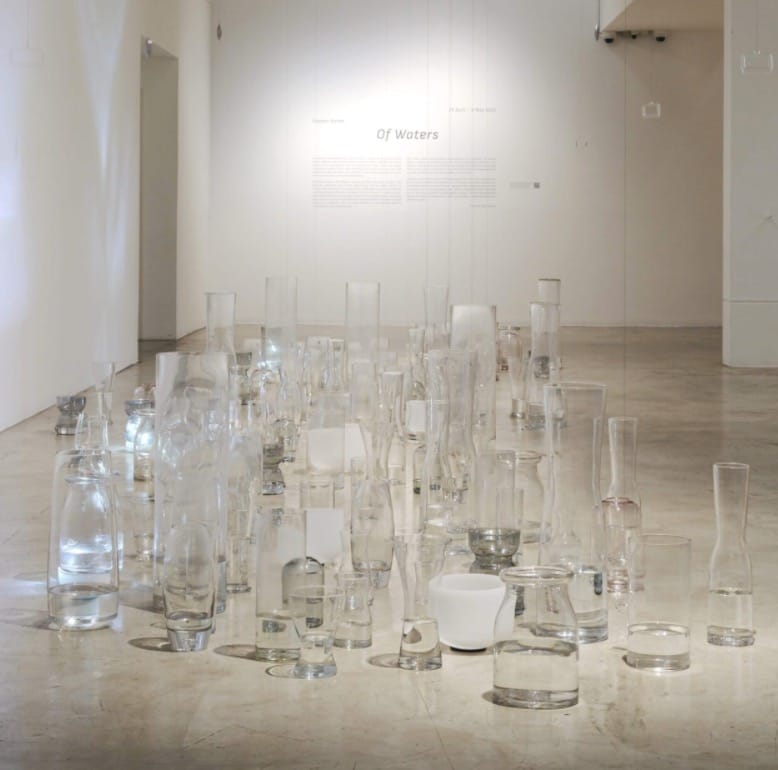