From the ocular to the auditory, Strike transforms STPI from a gallery space into an acoustic playground for its audience. Dynamic with chance and mobilised by randomness, the privileging of sight, often associated with silent contemplation, gives way to the fullness of Strike’s sonic presence that visitors co-create with the artist.

From the ocular to the auditory, Strike transforms STPI from a gallery space into an acoustic playground for its audience. Dynamic with chance and mobilised by randomness, the privileging of sight, often associated with silent contemplation, gives way to the fullness of Strike’s sonic presence that visitors co-create with the artist.  In this process, the work shifts gears from passive exhibition-viewing to an audience-activated sonic sculpture by “playing” the space and “listening” to it enlivened with ever-changing sonic notes.

Of Waters is the second solo show proudly presented by STPI, this time in association with the internationally-linked Galleries-Curate RHE project, and includes the two new work commissions curated by Marc Gloede, Strike and Firewater (in collaboration with Martin Kirkwood).

Strike presents a creative arena wherein the audience’s performance is integral to the completion of the work with sound and as sound. The Latin root of the word “audience” refers to a group of spectators as much as “an act of hearing” where the same audience-performer is engaged in a feedback loop as both the player actuating the sounds as well as the listener of those simultaneously made by others in the space.

To do this, Strike physically situates the audience in and amongst an archipelago of 250 glass receptacles spreading across the floor. Standing amongst these upright geometric and voluminous forms, some rising as far as one’s hips, others filled with water (for tone and pitch), the act of looking gradually (and intentionally) feels dissatisfying, prompting the question “why look when one can also play?” The in-between spaces between each glass vessel increasingly present as a community of voids - pregnant with sonic potential - while strategically-placed triple-strikers on the ends of long cables hanging down from the ceiling cajole invite the audience into authorship with the artist. At a simple tug, these acrylic striking objects transform into kinetic devices as they are released into the gaps at a velocity that gains traction. In sweeping motion through the voids, they activate unchoreographed swing-hits against glass walls recurringly to unleash a cacophony of gamelan-like sounds that resonate throughout the space.

Enlisting the gallery visitor as a collaborator produces a way of kindling the “voice” of an otherwise quiet and static work.  The audience-performer’s autonomous force of hand deftly transmits a musical “de-arrangement” by conspiring with the gallery walls, floor, ceiling, pillars (and other bodies in proximity) to turn the spatial architecture into an acoustic environment. But Strike also offers a way to wean ourselves (and the process of artmaking) from being addicted to control to relieve us from the way exhibitions have morphed into a kind of sensory deprivation where artworks can only be “touched with the eyes” - the equivalent to the caution “Don’t Touch the Artwork,” echoing physical and social distancing of the pandemic.

Kinetic and unpredictable, Strike is also a live performance of drawing lines, waves and arcs of sounds, rendered for our eyes by the criss-crossing of strikers activated by the audience-collaborator. But it is also an unrepeatable sonic score to be watched and heard live in motion - darting strikers lead the eye from point to point, sound to sound, note to note, percussing glass walls to produce sonic vibrations in the air, at times isolated solitary tones, in other moments clustered, complex and overlayed -  because a set of three or ten sets of thirty strikers could be released at once, instigating at every single activation of the work a unique acoustic event.

The adjacent installation of the stereo audio recording Firewater turns STPI’s right wing into a resonant chamber to present a sonic masquerade that floods the listener with a stammering sonic imprint - a double image of the element of water sounding the element of fire - because the source is perceptually withheld. ‘Strike,’ on the other hand, reveals the origins of its acoustic phenomena, but more than that, it asks the audience to not only become the source of activation for its energetic transference, but also to watch the sculpting of its sonic presence live in motion. 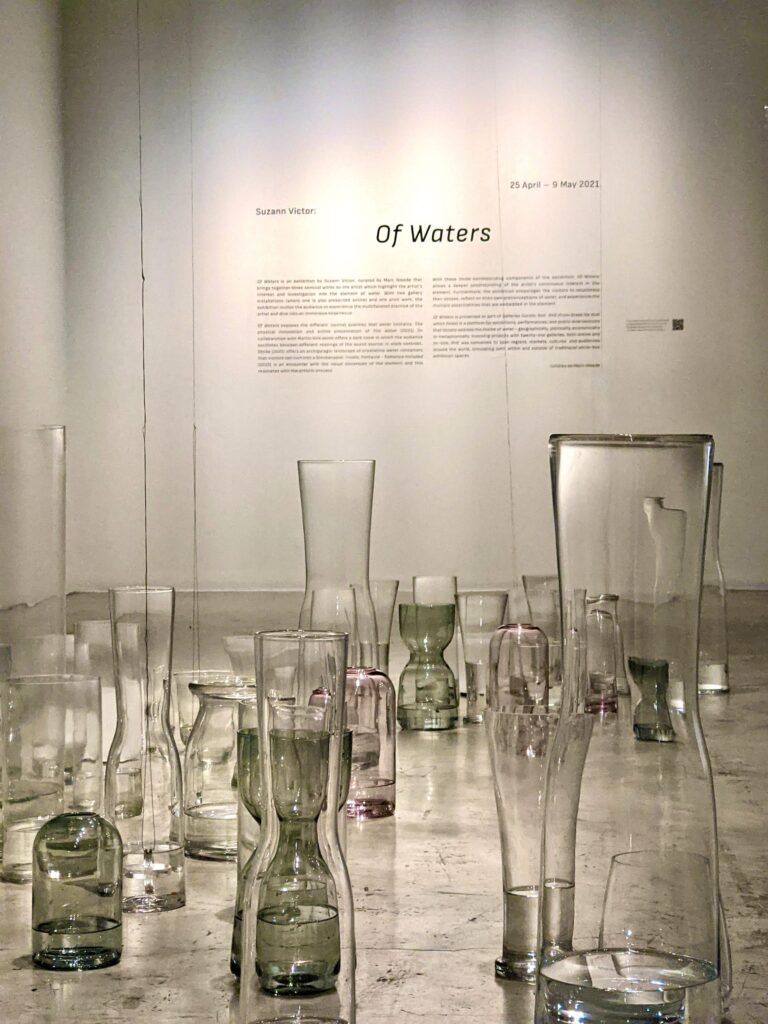 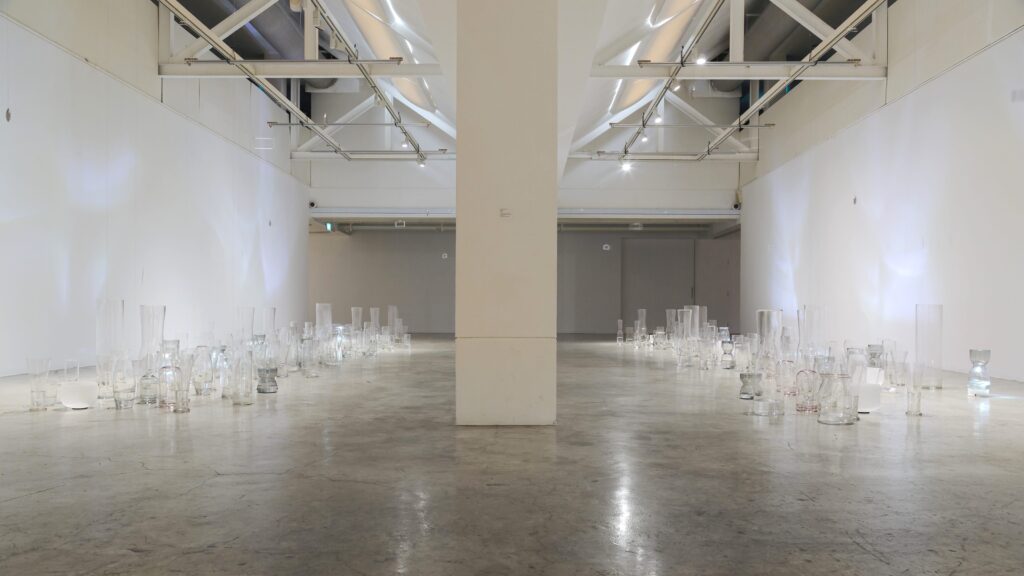 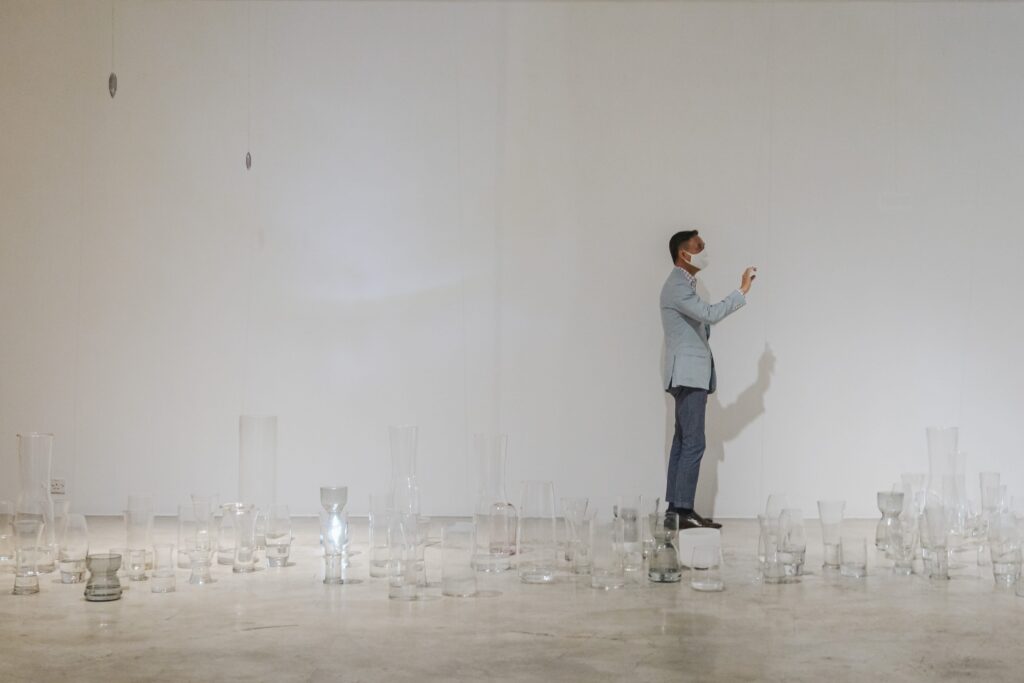 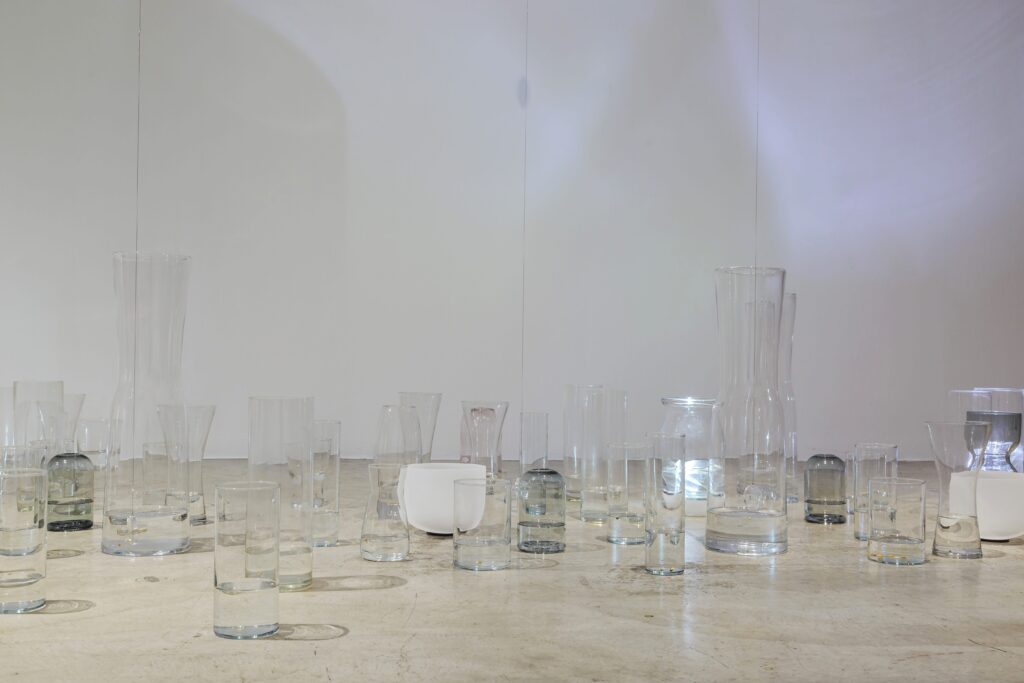 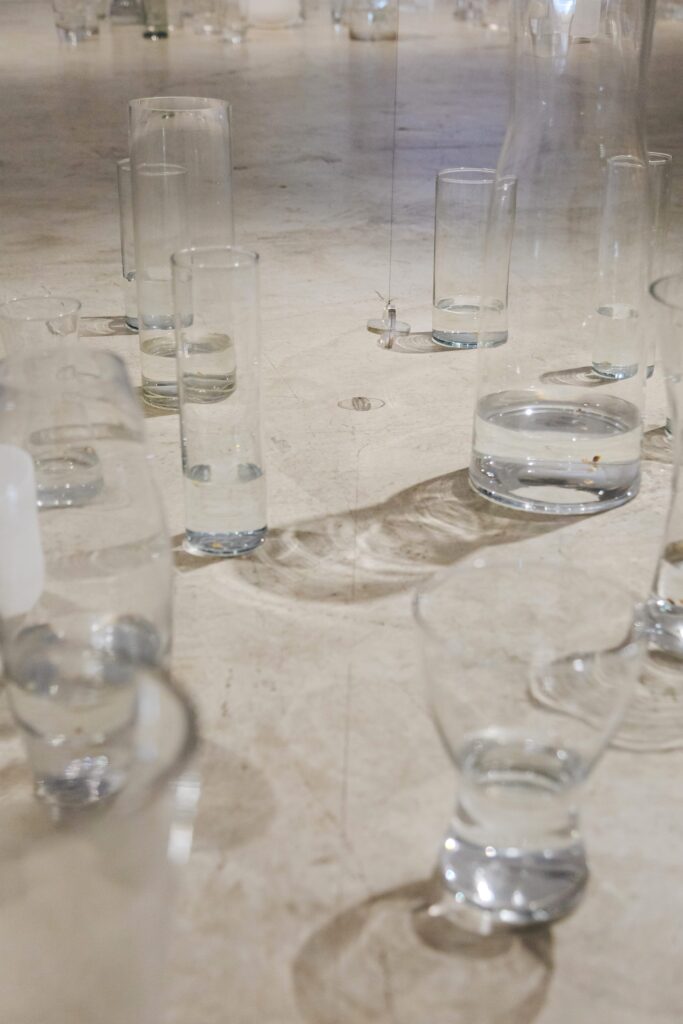 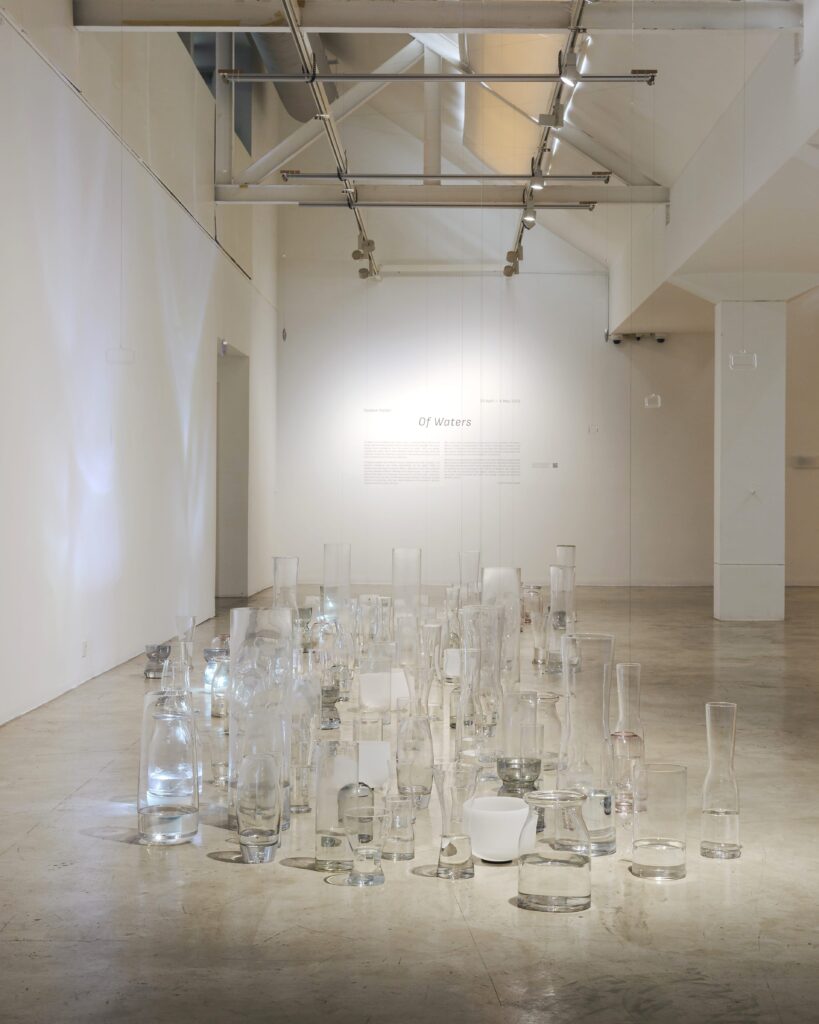 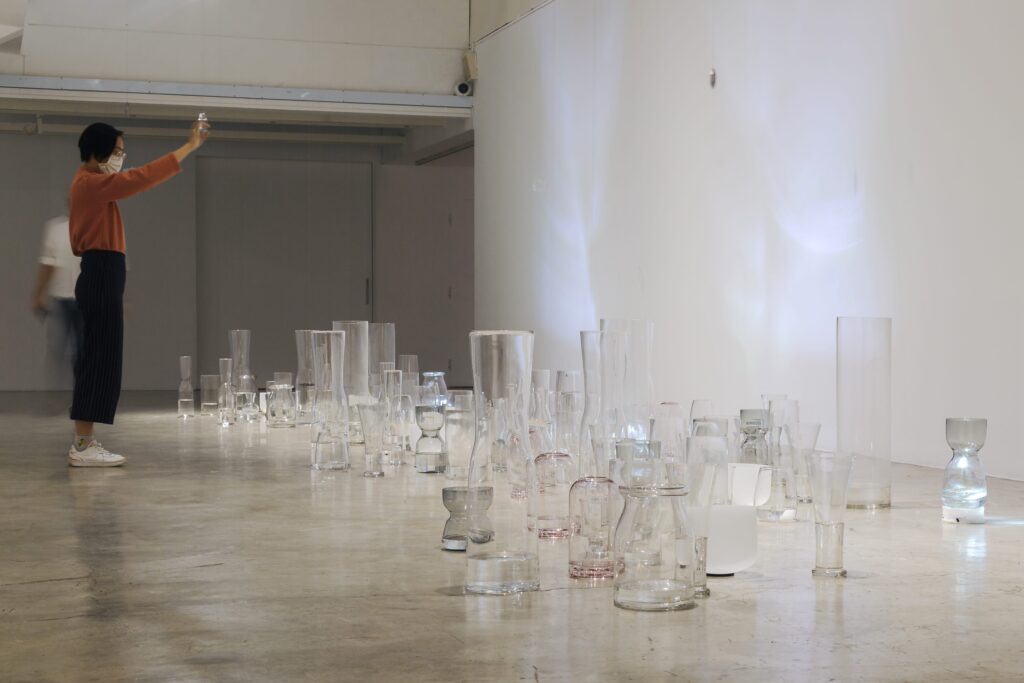 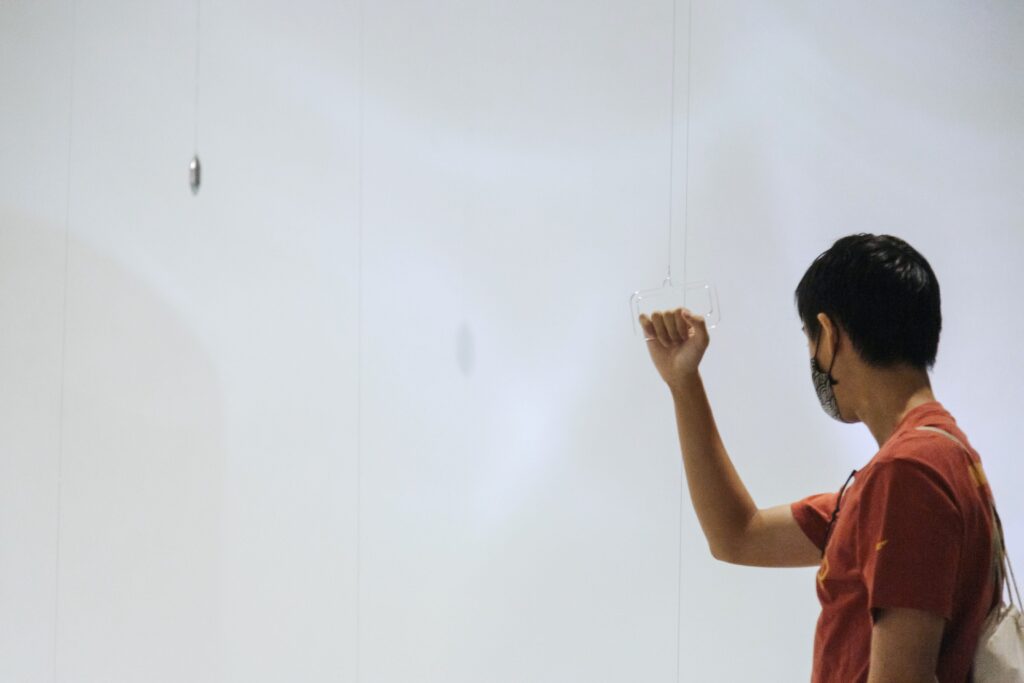 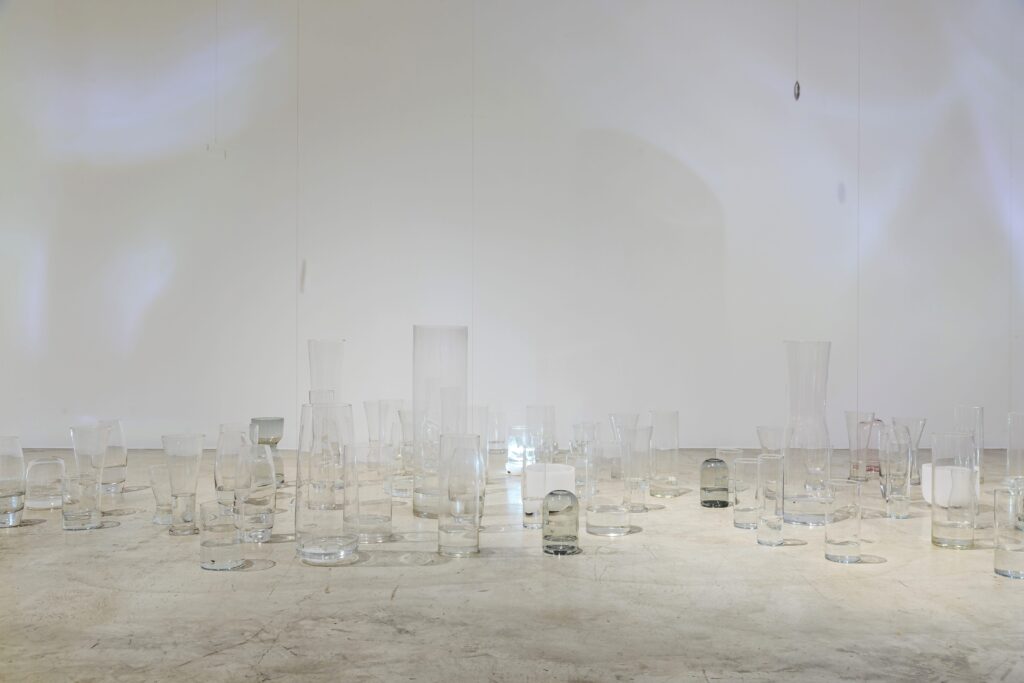 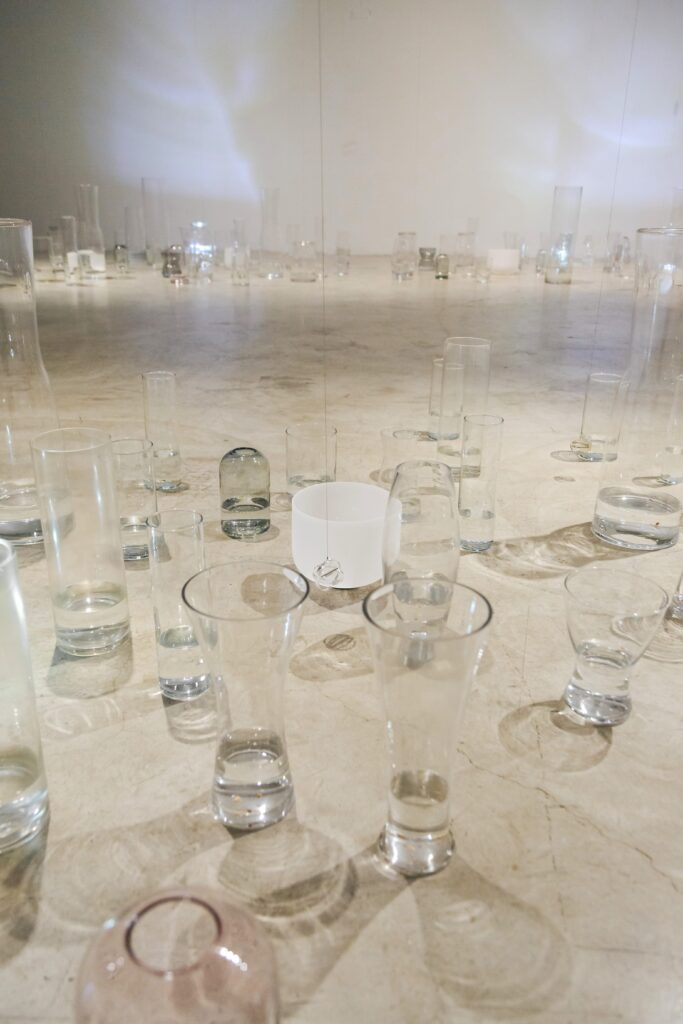 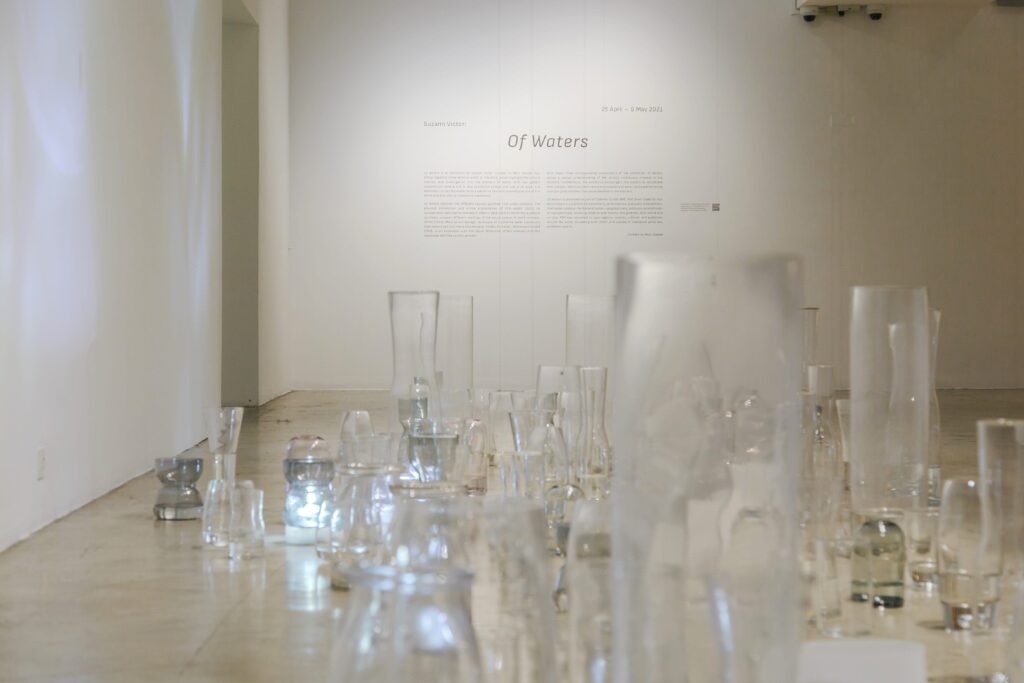 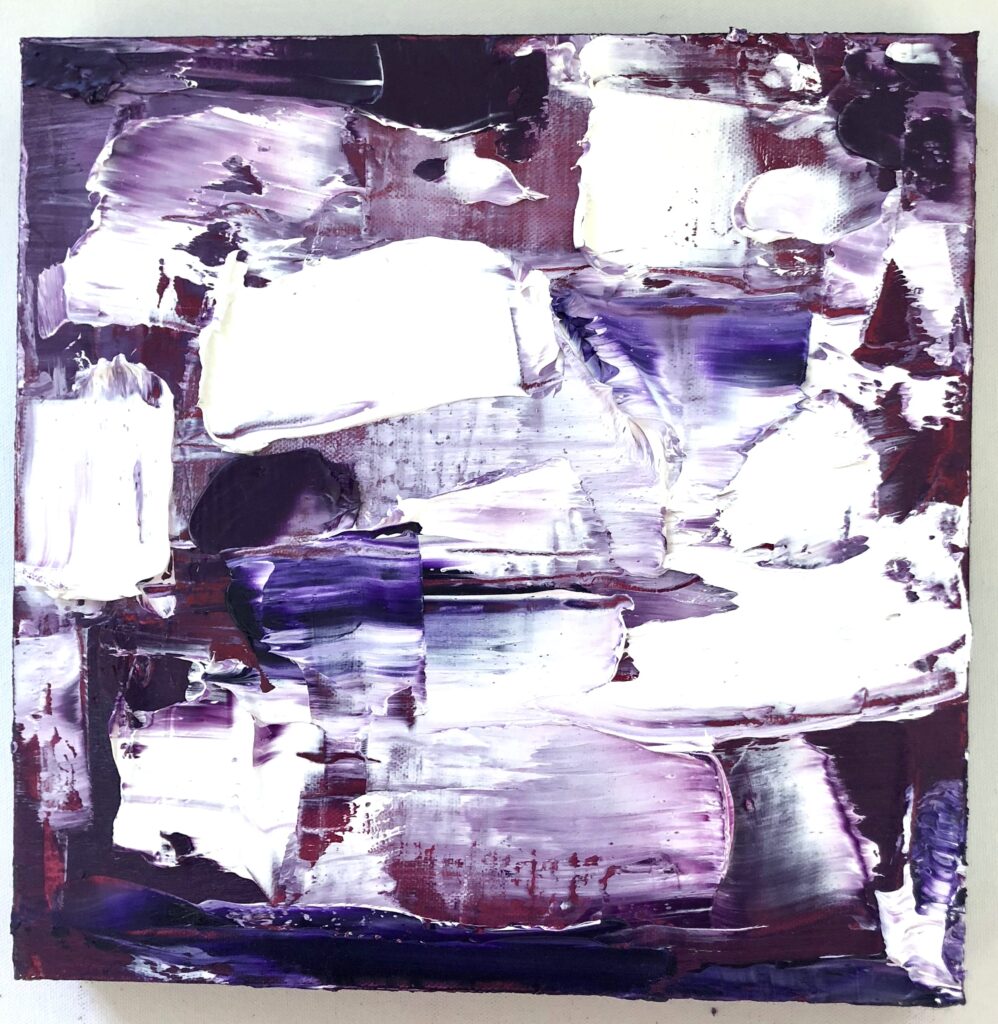 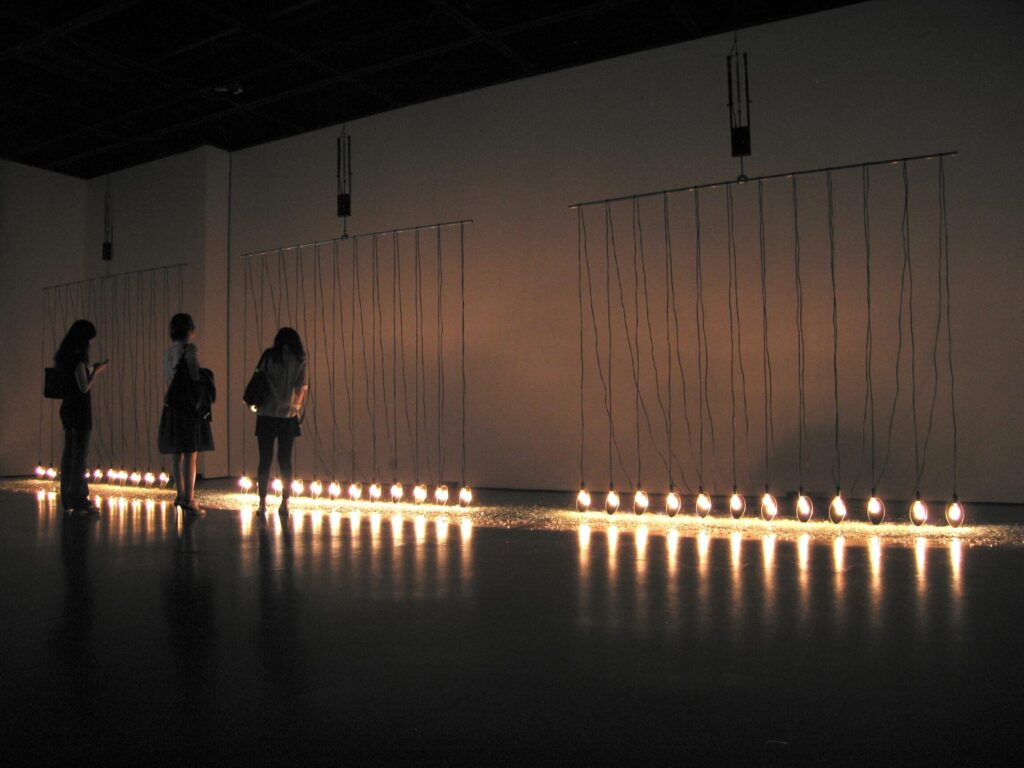 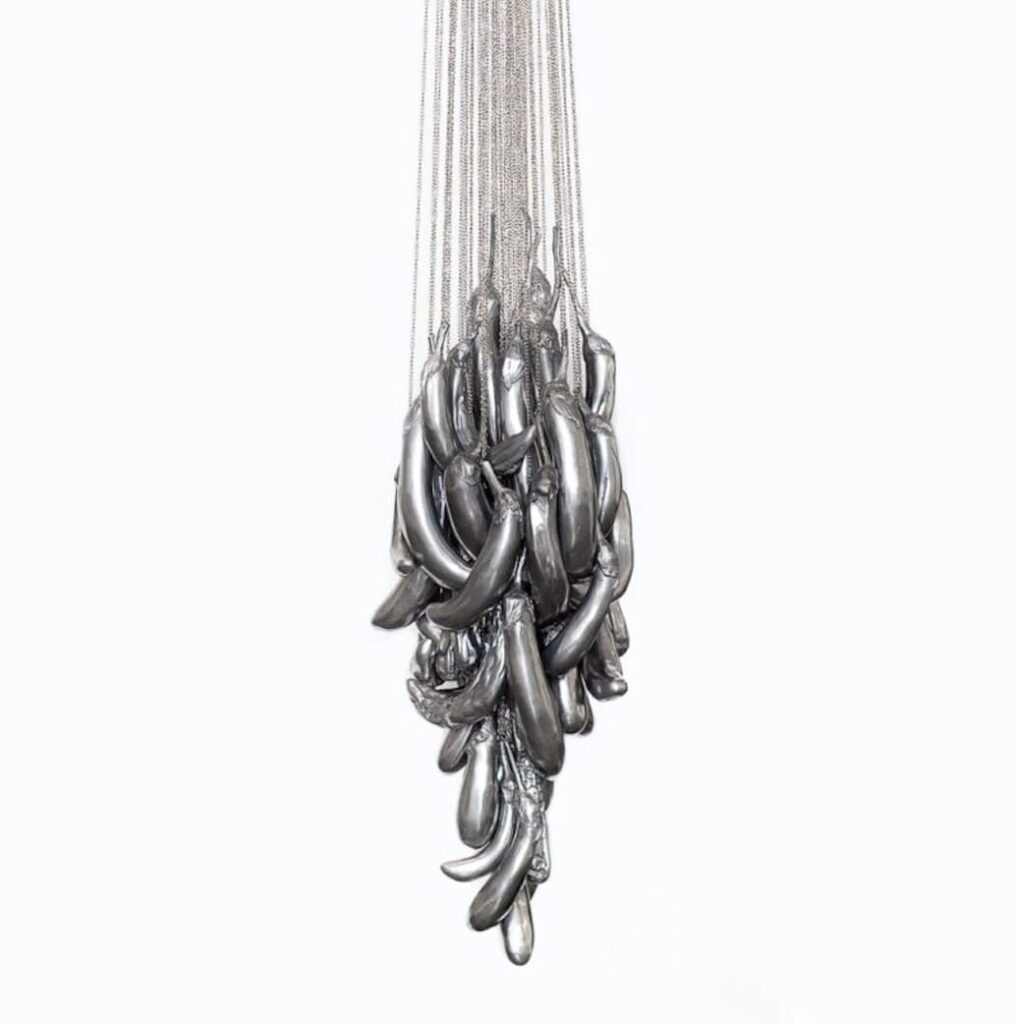