Still Life lures the audience into a space initially infused with the aesthetic drama of the ordinary, confronting viewers with the incongruent sight of a hundred fresh eggplants that appear to grow out of the slate walls of 5th Passage, Singapore’s first artist-run corporate-sponsored art space located at Parkway Parade.

Still Life lures the audience into a space initially infused with the aesthetic drama of the ordinary, confronting viewers with the incongruent sight of a hundred fresh eggplants that appear to grow out of the slate walls of 5th Passage, Singapore’s first artist-run corporate-sponsored art space located at Parkway Parade.

As diverse in their curved gestures as the glossy hues of purple that sheath them, these eggplants transition from the phallic into the abject over the two-week duration of the group exhibition Body Fields. In this unhurried performance akin to morphing signs, their turgid bows gradually turn into falling and failing arcs, so glacially slow and imperceptible as to only be evident in lapses and intervals of time. As each eggplant droop in nuanced degrees, the states of decay remain within their shrivelling skin-pockets.

Still Life is credited as an early exploration of site-specificity and installation work in Singapore art in 1992. As a perishable organic fruit, the aubergine or brinjal, as they are also known, innately offered an ephemeral dimension and form for Victor to render the phallic abject through imperceptible movement, induced by gravity and putrefaction. This would turn out to be a prelude to her kinetic works – a series that harnessed the physics of Simple Harmonic Motion by using magnetic coils to drive the exhilarating aerial movements of chandelier-pendulums. Still Life would also mark Victor as a feminist artist. Such an examination of patriarchy in the structuring of social spaces would not receive significant and concerted attention by geographers in academia until the publishing of Linda Peake’s essay ‘Race’ and Sexuality: Challenging the Patriarchal Structuring of Urban Social Spaces later in August 1993.

Each eggplant is anchored into the gaps between the slate tiles with a metal pin. Even though they spread laterally across three walls, including a corner junction, these elongated forms also extend from given positions, thrusting themselves into the viewer’s space in ambivalent gestures of reaching out yet rejecting approach (or scrutiny) - a stance that also blurs the boundaries between presentation and viewership, distance and proximity. With regal-coloured skins shining like impasto oil textures, their short-lived visceral seductiveness eventually succumb to the cumulative forces of gravity and time, each degree of slouching a secretive durational performance. In this slow fail to maintain their projection out of the wall, their previous firmness, shape and texture decline. The rotting seeds and flesh remain contained until such time, overtaken by abjection, the insides secrete to the outside.

At various stages of this process, the installation’s conceptual intent and meaning evolve along with the work’s initial compositional, spatial and gestural values. As the eggplants decompose, fresh ones were put in place to re-compose the artwork, at times in different positions. With each implemented change, the whole work is reconfigured to offer viewers the chance re-encounter the artwork anew.

Still Life foregrounds numerous motifs that would come to characterise Victor’s later creations. Most notably here, the artist’s interest in natural phenomenon, manifested firstly through the durational and transformative aspect of the work, and secondly through the audience’s ocular participation, albeit subtly, by utilising arcs (for example from the curvature of the eggplants) that the eye traces - a precedent to the oscillating swaying arcs of her chandelier-pendulums (Rich Manoeuvre series 2001-2016), indoor rainbows arcs (Rainbow Circle 2013), the cascading folds of her glass and lens quilts (Havana Biennale 1997, 5 Stars 2015) and seamlessly-joined garments (His Mother is a Theatre 1994, Promise 1998).

Moreover, these two aspects cumulatively suggest an element of, not-quite-performativity, but animation and movement in what presents itself essentially as a site-specific installation, all except for a rare occurrence when during a visit to 5th Passage, Singapore performance artist Tang Da Wu spontaneously “spoke” to the work, not with words but with a trance-like dance, knees bent with hand gestures articulating the voids between eggplants.

Although seemingly humorous upon first encounter, initial impressions quickly give way to a threatening aura. The eggplants, with their characteristic phallic form establishes the place of presentation – and prompting the recognition of other social spaces for that matter – as patriarchal space: hostile. In recognising the gendering of spaces as such, the eventual putrefaction of the eggplants seemingly alludes to their eventual decay and non-generative state.

*Victor was the concept-developer of 5th Passage, one of Southeast Asia’s earliest feminist artist-initiative (1991-1996) to generate new art audiences from Singapore’s de facto community centre - the shopping mall - by tapping two resources at hand: the readymade public within the readymade public space. As the country’s first corporate-sponsored art spaces (Parkway Parade and Pacific Plaza), 5th Passage also set the precedence of reaching out to the public long before “outreach” became a mainstay of local art institutions to come. 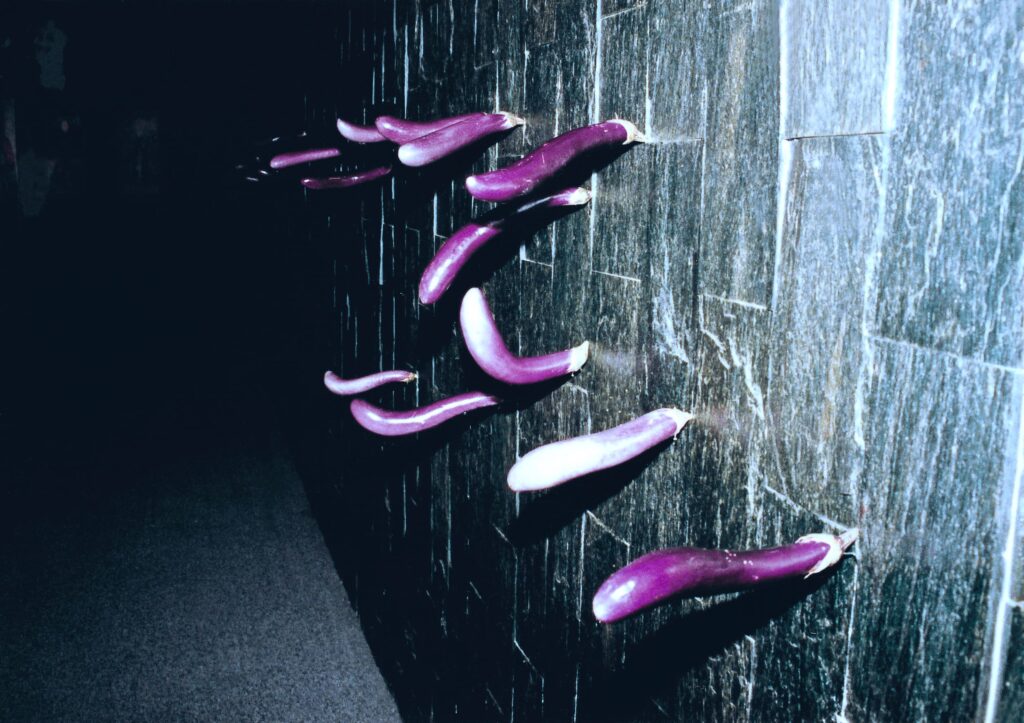 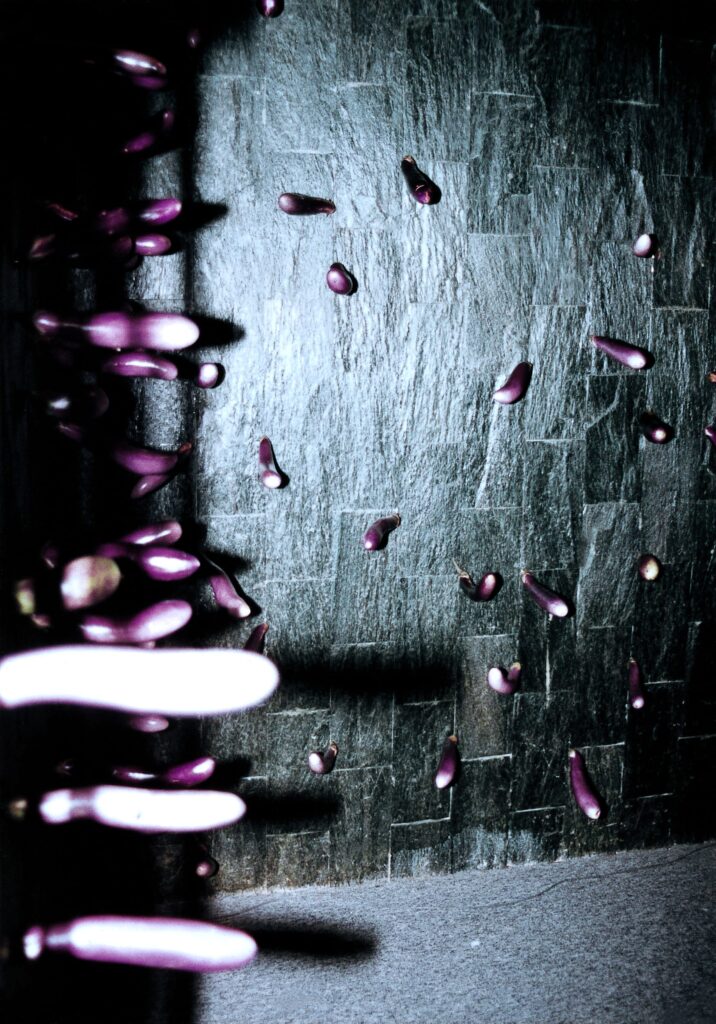 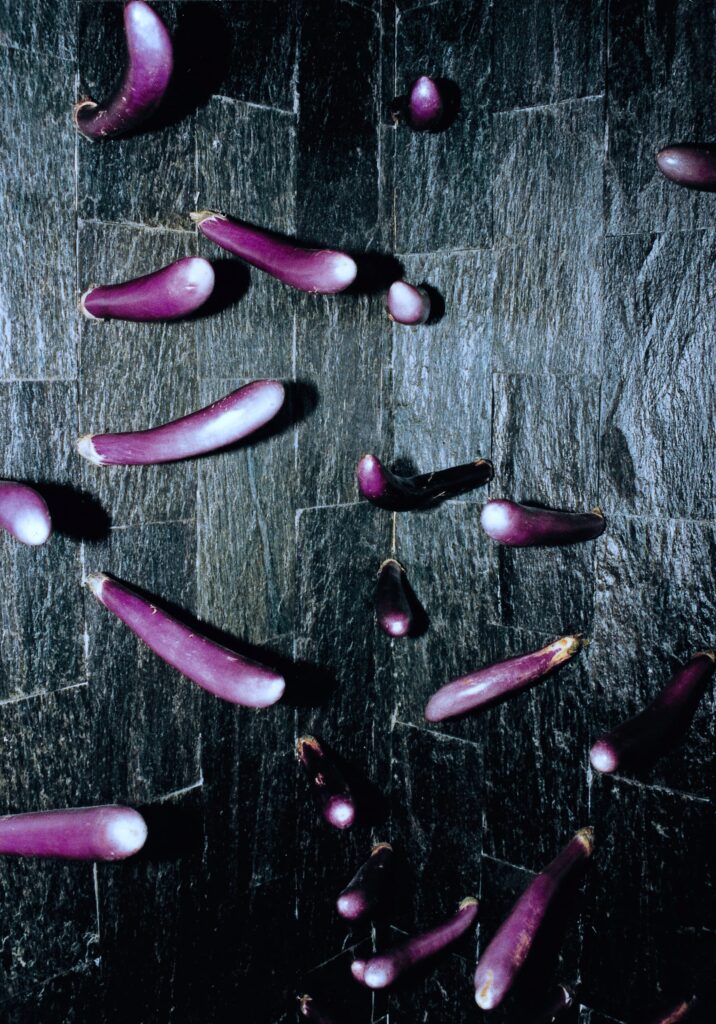 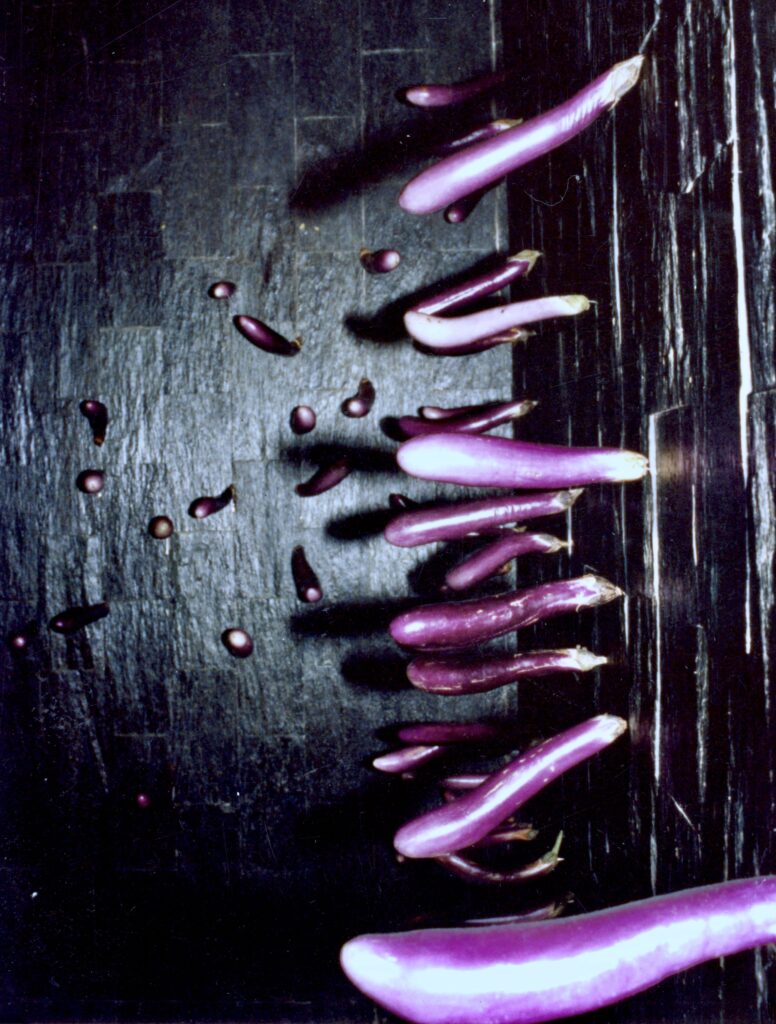 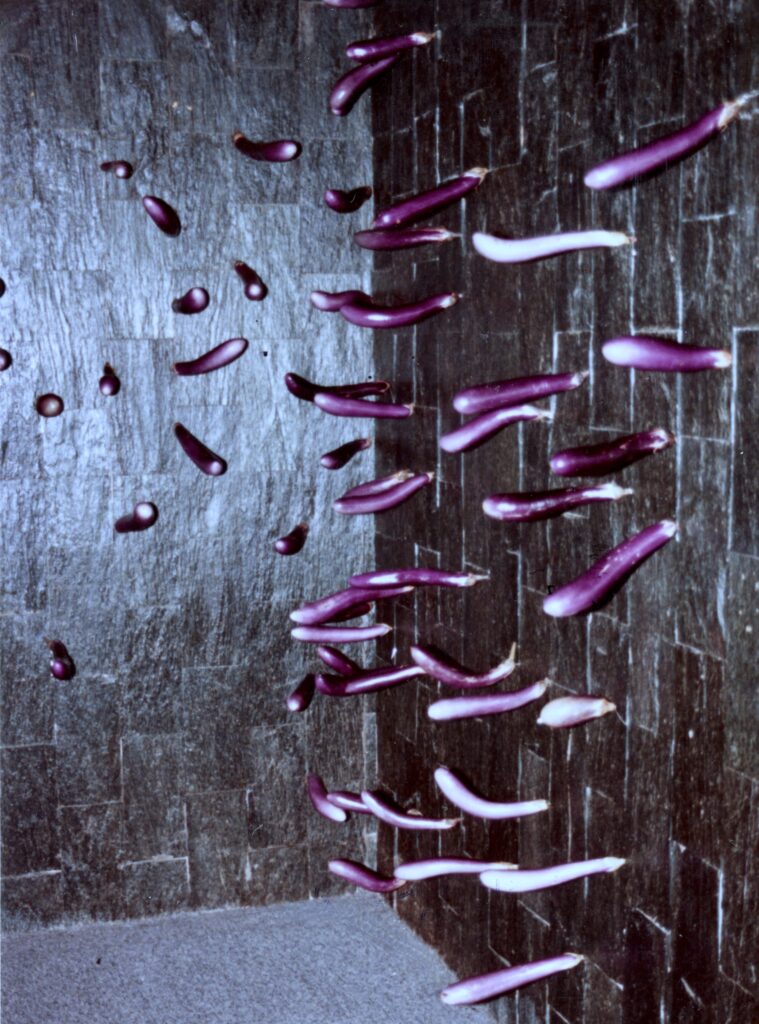 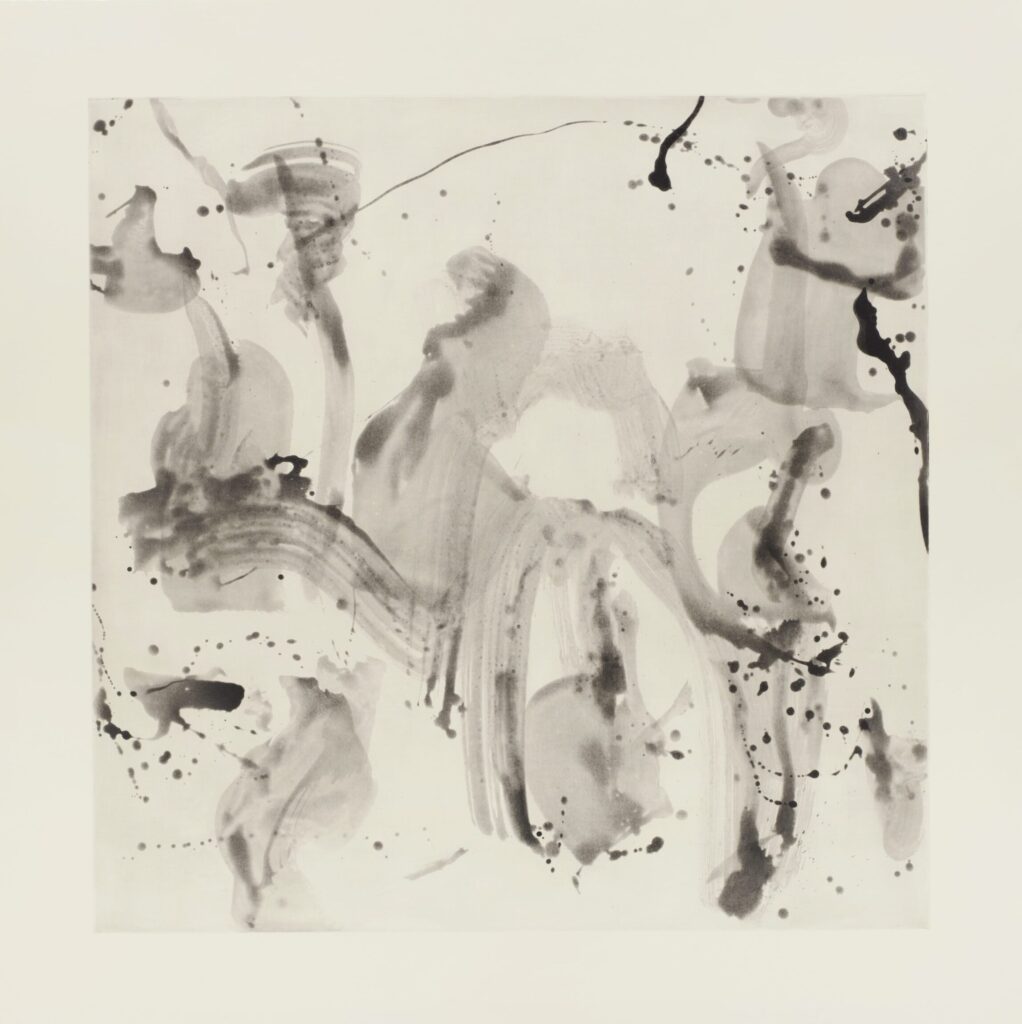 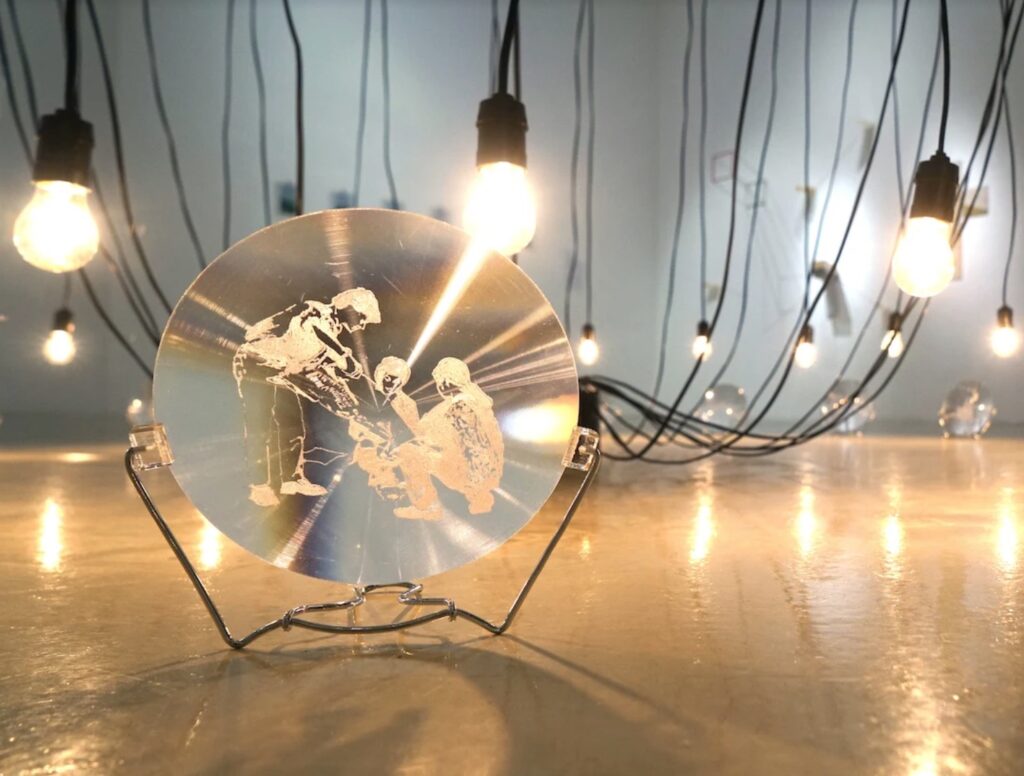 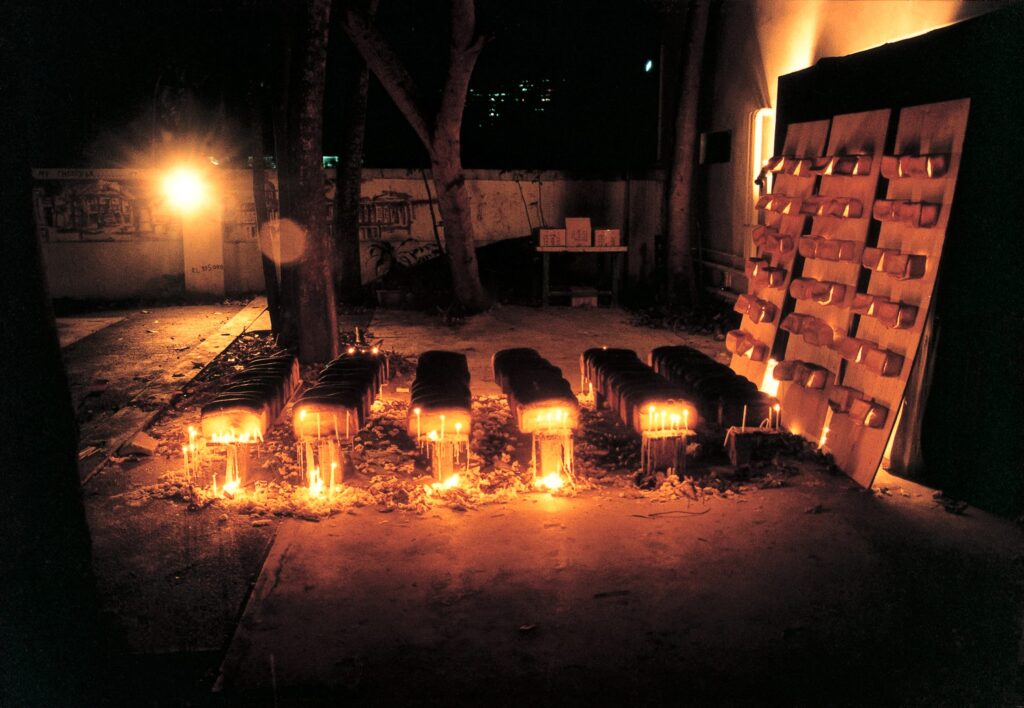 Fast
1994
THE DAVID MARSHALL TALK
The Substation
NEXT WORK